The planet Venus in your astrological chart is associated with things you value, like love and money. Every Zodiac sign has its own unique spin on those issues, but Venus especially likes the sign of Taurus, which has a sensual yet practical approach to both love and money.

People with Venus in Taurus have a sense of abundance about the material world, and they usually find what they seek in this regard.

Venus Basics: Which Sun signs can have Venus in Taurus?

Venus stays within two signs of the Sun in terms of relative position to Earth. That means people who have Venus in Taurus can have the Sun in only the following signs: Pisces, Aries, Taurus, Gemini, or Cancer.

A person who has both the Sun and Venus in Taurus loves sensual, physical pleasure and finds it important to look and feel good. A person with Venus in Taurus and the Sun in one of the water sign options, Cancer or Pisces, might broaden this focus on feeling good to include emotional comfort as well.

A person with Venus in Taurus and the Sun in Aries or Gemini, however, might have more internal conflict. While Taurus is drawn toward security, Aries and Gemini are more interested in the pursuit of excitement.

Venus Basics: What does it mean that Venus rules Taurus?

Each of the Zodiac signs is ruled by at least one of the planets or luminaries. Venus rules two signs: Taurus and Libra. The signs ruled by a planet are the signs where that planet’s interests are expressed most straightforwardly and with fewest complications. Venus has to do with what you value, which encompasses both money and love.

Venus in Taurus people have an uncomplicated approach to these things. They save money when they need to, they spend money when they need to, and they enjoy the physical side of love. Venus in Libra people have a more idealistic approach – Libra is an air sign, while Taurus is an earth sign – but they have supreme confidence that their love stories will end happily ever after.

Let’s get the bad stuff out of the way first. The detractors of Venus in Taurus people would say they are shallow, materialistic, and lazy.

Venus in Taurus people don’t really have that many detractors because they are able to spin even their more difficult tendencies in a positive way. They appreciate beauty and fine craftsmanship, and they value relaxation and nurturing their bodies.

Venus in Taurus people value feeling good, and they tend to have a gift for sharing this with the people they spend time with. They know where to get the tastiest food and the best massage, and, with their tendency to be generous, they might treat.

They do understand that it takes money to have some of the pleasant experiences they value, so they can be averse to any risk that they perceive would threaten their financial security. They therefore tend to pick stable jobs.

Venus in Taurus people are not likely to be found on the cutting edge of the latest experimental idea, but they are experts in finding pleasure in what is already readily available.

Venus in Taurus in Love

Venus in Taurus people are the world’s ultimate romantics. They are just waiting for love to wander into their beautifully set trap, complete with fancy dinners and comfortable bedsheets.

Venus in Taurus in love is a very sexual placement, but whatever goes on in the bedroom is only part of their more broadly sensual approach to life. People with Venus in Taurus are looking for mates who can take pleasure in the whole entire physical world with them.

A cerebral partner who lived in their head would not be a great match for Venus in Taurus, unless they always proved to be a reliable yes vote for however the Venus in Taurus person wanted to cook or decorate the house that time. Venus in Taurus can be stubbornly convinced that their own taste is the best taste, and a little “Yes, dear” goes a long way with them.

Venus in Taurus wants security, so typically Venus in Taurus people are ultimately looking for long-term relationships to build domestic bliss around. With Venus being strong for them, however, they know their own value, so they are not willing to settle for a situation where they are not treated well.

The Venus in Taurus man will go all out to woo a mate. What will turn him off is a question about how much all those flowers and baubles cost.

Taurus is the fun one of the earth signs, as opposed to Virgo and Capricorn being the signs inclined to ask questions like that. The Venus in Taurus man just wants to have the uncomplicated joy in the moment of spoiling his partner.

Yes, the Venus in Taurus man wants to make a good impression, but he also genuinely cares about his partner’s pleasure.

The Venus in Taurus woman likes a partner who can supply her with the level of material comfort she prefers. Hey, she might be a mother someday, and she’s got the security of her potential children to think about.

Regardless of what her future holds the Venus in Taurus woman enjoys pleasure in the moment. She will graciously appreciate any gift or pleasant experience her mate gives her, and she will reciprocate with the considerable skill she has for making people feel good. 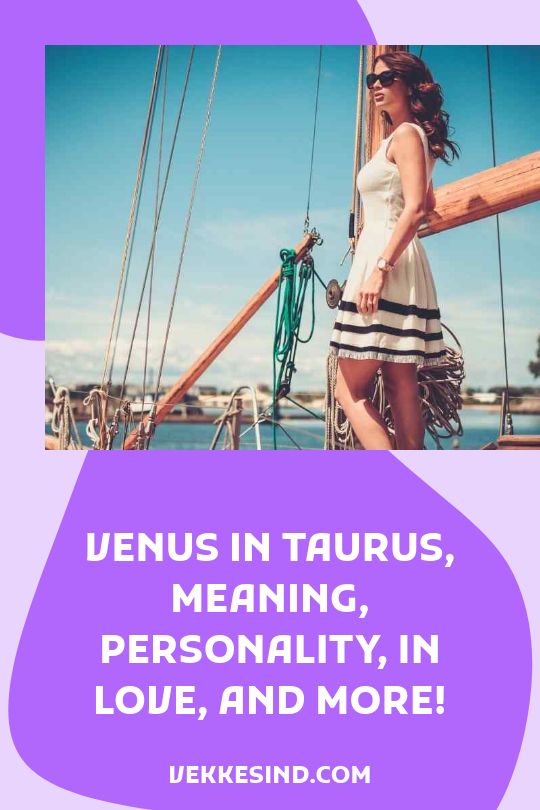 […] Venus in Taurus meaning, personality, in love and more […]