The Three of Swords is a bleak and heavy card. Its illustration is familiar, simple, and easy to interpret: three swords pierce a red heart, clouds, and rain over a grey sky in the background.

Unique in the series of Swords because of its obvious emotional connotations that would otherwise pertain to the Cups, the card invokes thoughts and feelings well-known to all human beings, like sadness, gloom, and heartbreak, though not without a faint glimmer of bittersweet hope. In the words of Placebo’s singer Brian Molko: “A heart that hurts, is a heart that works.”

The number Three in the Tarot symbolizes a sudden burst of energy that can lead to either creation or destruction, as indicated by Arcana III and XIII. For the Lesser Arcana, it is the beginning of realization, either a truth discovered or, quite literally, the manifestation of everything that began with the Ace, the initial spark, and was then brought together in the Two, the calm before the storm.

The Swords do not like change. However, they are the suit that’s most susceptible to alteration in both form and context. The wind changes in the blink of an eye, the mind is seldom at ease. Fairly simple and obvious, if not brutally honest, the Three of Swords’ name could be “The Lord of Sorrow.” An eastern wind brings us to the dark side of understanding, into emotional pain and grief.

Painful knowledge and traumatic experiences; when a wound heals, the scar remains. Beyond the surface layer of melancholy, the swords converge on a single point in the center of the heart, hidden from view. Is this merely the exposure of a weakness?

A threefold interpretation is needed to fully comprehend this card. There is a sadness of course, and the conscious or involuntary way one chooses to deal with it, but there is also a promise of clarity. The cleansing rain washes confusion away and leaves no place for truth to hide. Illusions dissolve and, if we embrace it, the pain will change us forever.

It’s worth examining the card’s paradox: while the Swords symbolize the intellect, here we see a heart, a symbol of love and the emotional realm. The Tarot being mostly an invention of the Western world, it’s only natural it should address the separation of heart and mind so casually.

In ancient Chinese philosophy, the heart was believed to be the center of human awareness. The same character, xin, refers to both one’s “heart” and “mind” among other things. So we may ask the modern man: why divide them and create complications? This world and, by extension, consciousness as well as all kinds of life forms belong to a delicate system where everything is interconnected. Even this “one” is an illusion after all, a point of reference.

The rain of understanding needs no translation. The stream of thoughts is just that, thoughts. Words are symbols, not the things they point at. There’s no ultimate point in finding recourse to either of them, nor in letting them define our lives. When one drop leaves the clouds, a myriad follow. Cling to the pleasant feeling of falling raindrops in spring and it’s gone before you know it. Run away to find cover, and you still won’t avoid getting soaked to the bone!

What does the Three of Swords Tarot Card mean?

The Three of Swords indicates deep sadness, sorrow, and melancholy, often unexpected and uninvited. The subject of the reading is heartbroken from recent bad news, experiencing intense emotional distress that affects their thoughts and everyday life.

It’s not just a rainy day, it’s monsoon season and the future is looking grim. There is no superficial drama in this card, the pain is genuine, the wound deep and fresh.

The Three of Swords’ message, for all its simplicity, is still very hard to accept. The most common interpretation would be that of a broken heart, but that might not always be the case. It is equally painful to part with the sense of security a beautiful lie.

Maybe you found out your sweetheart is not who you thought they were; maybe somebody’s harsh words hurt your feelings or they let you down when you most needed them. Though what hurts most is their absence, for what is sorrow but the loss of joy? A pleasant memory suddenly becomes a thorn in the flesh.

It might be of little to no consolation to say it will all be over soon. The Swords’ influence is always fierce and sudden but also temporary. However, the trauma could be so recent or deep it’s practically impossible to get over it just like that. People need a lot of time to grieve.

The painful realization of how fragile we really are is never easy to embrace and disappointment does not allow for the least bit of optimism, unless we rise to the circumstances and allow the pain to pass over and through, ultimately shaping us into stronger and kinder human beings.

What does the Three of Swords Reversed mean?

When reversed, the Three of Swords means it’s high time for the seeker to come to terms with their trauma, to embrace and release their pain in order to heal. The card is a reminder that forgiveness is very difficult, especially when we romanticize the past.

A flower does not return to the tree once it’s been cut off. We could say that a person starts to grow up when they have experienced true loss. Their life has changed forever. In order to cope, they build this illusion of a time when life was or will be way better, but for now they kinda like being sad.

To stay attached to sadness and faint memories is like building a lofty nest in desperation in the land where the rain never stops. To be honest, that’s how a lot of bad people get away with being bitter and rude—they justify malice by thinking no one else has suffered like they have and take great pleasure in inflicting their pain on others.

But let’s not get ahead of ourselves. With the reversed Three of Swords, there is a chance to heal and by accepting what has happened. One must fully experience and get over the pain, know it deeply and thoroughly, before they learn forgiveness.

There is invariably a silver lining here, an opportunity to prove that the troubles and pain of the past have not been for nothing. The shadow of loss gets a hold on even the most level-headed and strong individuals but it’s a part of life we all must face and accept. In time, it will be yet another story to tell.

Is the Three of Swords Tarot Card a Yes or No?

For a Yes or No question, the Three of Swords is a most emphatic “No.” A symbol of loss and sorrow, the Three of Swords tells you that what you’re asking for will end in disappointment or worse.  If, for example, you were planning to confess your romantic feelings to someone, the card certainly advises you to think it over.

On the other hand, the reversed Three of Swords is likely a “Yes.” It’s a good time to move on. Just be careful, you never know! 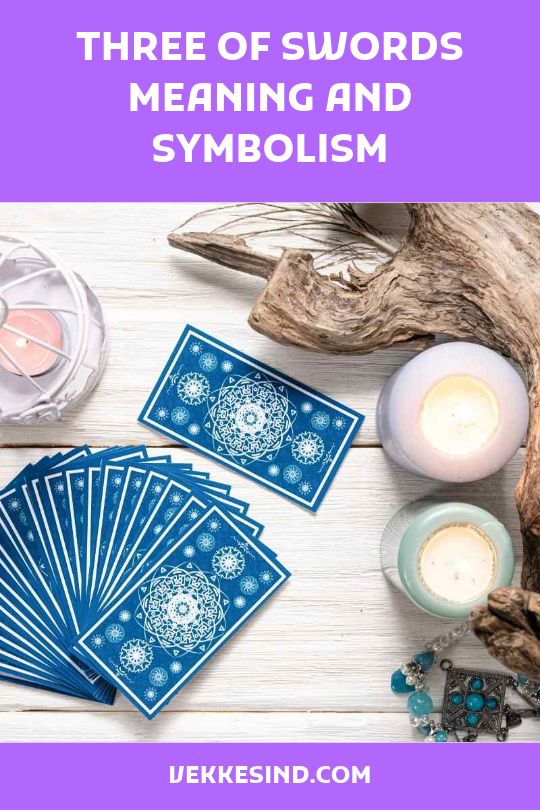