If you are a Taurus man looking for advice to deal with an Aries wife (long-term girlfriend), then click over to the article, “Aries woman and Taurus man in marriage” is written specifically for you!

OK, that said, let’s get going… The Taurus man is a slow and reliable husband. Of all the zodiac signs, he is one of the most committed when it comes to the idea of a traditional marriage.

The Taurus man and Aries woman in marriage may have its challenges, but it will have a natural type of intimacy. They will enjoy one another’s sensuality. The Aries woman will fulfill the Taurus man’s fantasies without him asking and because of his practical nature, the marriage can be long-lasting.

There would be two possible outcomes of a Taurus man and Aries woman together. One, they could have similar values and drives that they can see through each other without speaking. Or two, they would be too stubborn to admit and refuse to compromise that it’s just wishing for toxicity and it’s better to just be friends.

One is impulsive and another tends to weigh the value before making a decision. They can either balance each other or throw themselves in a bus. They are two different people with mutual interests. If Aries woman wants to make the Taurus man happy, then it’s better to assure him that she is loyal to him.

The Aries woman will be attracted to the Taurus man’s independence and mindset for finance. She will appreciate the Taurus man’s lack of neediness. She likes that he can be supportive of her without him being a burden. Sometimes they’re complimentary and other times it is opposing.

The Taurus man may feel intimidated by the Aries woman and potentially can feel insecure. The Aries woman may be impulsive which can mean she may not think about her finances seriously.

The Aries woman will enjoy the reliability of the Taurus man but need to take note of the Aries woman’s bossy side not to give him unrealistic expectations and to constantly demand from him.

For more details about “Dating a Taurus man… and the 12 things you need to know!” click here.

In romance and lovemaking, the Taurus man prefers a slow build-up but the Aries woman just wants it now. She is playful and may approach the Taurus man with a lot of flirting. She can become touchy trying to entice her Taurus man.

For 7 Steamy tips to turn on your Taurus man in bed, click here!

This pairing will surely be opinionated and stubborn. They might want different things. The Aries woman can be extroverted and adventurous and the Taurus man likes to be a homebody and be comfortable. Both of them may enjoy hanging around, feeling each other’s company.

Maybe a food competition will be something both will enjoy. It will satisfy the aggressive Aries woman and the hedonistic Taurus man. When it comes to expressing themselves,

Aries can be a bit insensitive. The Aries woman is blunt, she doesn’t like to sugarcoat and dislike mind games. In comparison to the Taurus man, he is very gentle and is slow to open up.

Both can be trusted to keep secrets about one another. The Taurus man values each and every one of his friends and he is sentimental. He takes time for him to get attached, unlike the Aries woman who might get hit by Cupid’s arrow frequently. If there’s a keyword here, Taurus likes to build while Aries wants to dominate.

The Taurus man is mostly simple and down to earth which may sometimes bore the Aries woman. Both signs show extreme devotion and loyalty to their partners. Taurus is slow to anger.

Though, you wouldn’t want to make a Taurus very angry. He’s usually underestimated, known to be chill, but when the last straw comes in, you’re just asking for mutilation.

The Aries woman, on the other hand, gets angry in bursts, after she has exploded, it is usually finished. While the Taurus man can have an elephant’s memory, the Aries woman has a forward personality and prefers not to dwell about spilled milk.

If you think about it, they have a lot of similarities in nature, maybe the approach is what makes it different. The Aries woman is ambitious and the Taurus man feels the same. Aries is stubborn but so can Taurus. They have a natural understanding of one another and both have convictions with their own beliefs.

If the Taurus man and Aries woman somehow are aligned with their goals and share the same values then they could just be soul mates. Between the two of them, the Aries woman will be more sensitive than the laid-back Taurus man, he is always composed and grounded.

If both of them are able to reach a middle ground then maybe they’re on to something and the relationship would one of the best risks they would ever take.

Does a Taurus man and Aries woman work, is it a good combination?

A Taurus man and Aries woman would work because although they seem like different people, their values are actually quite similar or agreeable. They both want to have the same things. They both have ambition and drive to succeed. Taurus will focus on stability while the Aries woman is the type to push her limits.

Marriage between Taurus man and Aries woman, In summary…

The marriage between Taurus man and Aries woman is either complimentary or an opposition. Both signs share a mutual interest, similar values, but may approach things differently. It’s like a 50/50 risk. You either win the lottery or drown in debts with this union.

The reason is that both the Aries woman and Taurus man are determined and suborn. They want what they want no matter what the costs. She is strongly opinionated and so is he.

The Taurus man is patient and it takes an eternity to get him angry, but when he does, he really snaps until the issue is fixed. It’s not like an Aries woman that would get angry in bursts and let it go. Definitely, there will be a strong connection especially at first, the question now is about if the marriage would last a lifetime.

The Taurus man will definitely prefer to work things out but sometimes when an Aries woman has made up her mind and thinks she’s bored there’s really no stopping her. She is always looking for a challenge while the Taurus man is content with chasing security.

The keyword to this marriage is compromised. This marriage between the Taurus man and Aries woman can only be long lasting If they balanced each other and learn from each other instead of complaining about one another’s preferences. 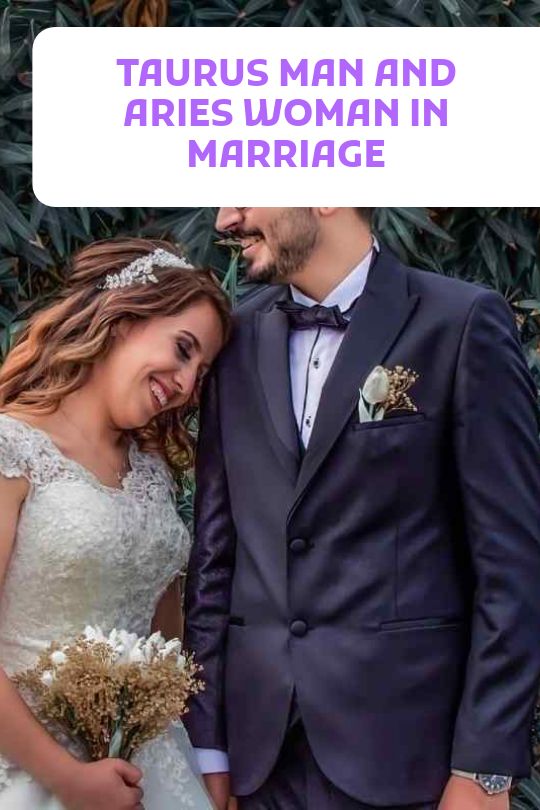