You can start to worry how a man feels about you if you’re hanging out with him and the two of you are getting close. You may get a fair idea if your man is falling in love by keeping an eye out for certain signs.

When a man is falling in love with you, he starts to focus on you and spends more time with you. He will introduce you to his friends as their opinions about you are important to him. He fully accepts everything about you. He will show his vulnerability as he becomes more comfortable with you.

Of course, we aren’t done yet. You didn’t think that that was all there is, did you? Let me give you a broader understanding of how to know if a man is falling for you.

Men in General: Understanding your Man

When it comes to love, men do not have the cleanest reputation. However, this does not mean they are generally incapable of genuinely loving people. Nothing makes a man happy than a healthy relationship where he can be just himself. He wants a relationship that is smooth and has no drama.

To understand your man a little more, know that sadness, frustration, and pain are all difficult emotions to process. Instead of communicating about how he’s feeling, he may distance himself from his friends and family. If you see this, you can try to communicate with him about what’s going on, but he may need some time to sort through everything on his own.

Most men haven’t had the opportunity to process their emotions. He could find it simpler to express himself by writing down his ideas and feelings and showing them to you or messaging them to you. He may take more time to process his feelings, and you should accept his requests if he says he needs space or time.

Even if he desperately needs it, men may find it difficult to accept your help. You can continue to offer your help in a gentle but firm manner so that he knows you’re there for him if he needs it. This could be due to the fact that he isn’t ready to be vulnerable just yet. While not every man has commitment concerns, this is more common among younger men. He could require more time to mature and accept his emotional fragility.

Men, like women, do not desire or deserve to be stereotyped. Men might be introverted or extroverted, goal-oriented or wanderers, among other traits. Ask him questions to get to know him as a person, not just as a “man.” Then take a seat and let him handle most of the talking. If he’s interested in pursuing a relationship, he’ll repay the favor later.

Some guys are uneasy expressing their feelings because of stereotypes about how men should act. Give him the reassurance he needs to know that it’s alright to express his emotions and that he doesn’t have to maintain his tough-guy persona while you’re alone together. As long as you offer him the opportunity to discuss his ideas and feelings with you, there won’t be any mind-reading or understanding needed.

6 Signs that He is In Love

He fully accepts you

Because of the automatic responses that occur in our thoughts, we are able to put our judgments aside and only perceive the best in our partner. He appreciates your peculiarities, flaws, and even their snoring, which sounds like a melody. When a man falls in love with you, he accepts all of your shortcomings without question. Even the things about which you may be self-conscious.

He actively wants to combine himself with you and urges you to accept yourself. He might do this by taking up your interests or hobbies, or he might look at you in a specific manner, and he begins to see you in ways you’ve never seen before.

Emotional vulnerability is one of the signs that he’s falling in love with you. This isn’t a wonderful experience for men since it makes them feel helpless, which they don’t like. He could be clingy, jealous, or anxious that you’ll reject him. This doesn’t imply you’re doing something wrong; it just means he’s having trouble controlling his emotions.

It’s particularly common among men with lower-than-average self-esteem. This makes him doubt his own worth and makes him wonder why a woman like you is with a person like him.

He focuses on you

There’s a strong possibility he’s falling in love with you when he starts to genuinely be with you, focuses on you, and does things for you without you asking. Men don’t invest their efforts into women with someone he isn’t interested in. Men also don’t take on the job of provider or protector for women who aren’t in their immediate future.

When you’re talking to him, notice if he pays attention to you and asks you additional questions, as if he genuinely wants to learn more about you. This could be a sign that he’s falling for you, and if he is, he’ll want to be more active in your life.

He spends time with you

A man in love with you will never grow tired of your company, and he will be excited when the two of you get to spend time together. He doesn’t want to rush anything while he’s with you and loves to spend the entire night or day with you. He has no motive to escape or end your time together unexpectedly.

He’ll take his time with you, and as the two of you spend more time together, you’ll notice if he’s the one reaching out to you, asking to hang out, and you’ll let him make the first move so it’s not just you.

If your partner acts completely himself around you, such as freaking out about something he enjoys, it’s possible he’s in love with you. If he isn’t hesitant to have an in-depth discussion with you about your mutual interests and likes, and he isn’t afraid to tell you anything, it’s a good sign that he is completely comfortable with you.

If the two of you have only spent a short amount of time together, he may appear shy or nervous at first because he is afraid to express the words he knows he is feeling. And because he loves you, he knows he can be himself around you, just as he is with his friends and family.

He introduces you to his circle

This is an excellent sign since getting to know his friends will reassure you that he wants you to be a part of his life and that your relationship is important to him if he’s telling his friends about you.

If he has introduced you to the majority of his friends, it is a positive sign for your relationship. It suggests he enjoys being in your company and is willing to tell his friends about your qualities. If his friends take the opportunity to include you in activities, it’s a good sign that they support and approve of you, which is important to him if he’s in love with you.

He asks about your future plans

It may be more typical for women to talk about the future, but men do it too. If your man is truly in love with you, you will notice how he asks about what your goals are and what you’re trying to reach.

He will slowly ask you if you want to have kids in the future, where you want to live, or what type of neighborhood you want to live in. This is a sign that there is a certain level of intimacy, and that he is thinking of you as part of his future.

Signs he is in love, final thoughts…

You might wonder if you desire to love or if you love your partner at times. It is possible to fall passionately in love and to fall out of love at the same time. Being open to love and accepting that not every relationship is meant to be is the key to most happy relationships.

Many women are afraid of falling in love with a man, especially if their previous relationships have failed or spiraled. This may have an impact on your mental health at times, but keep in mind that just because men don’t fall in love with you right away doesn’t imply you’re undeserving of love.

When a man is falling for you… 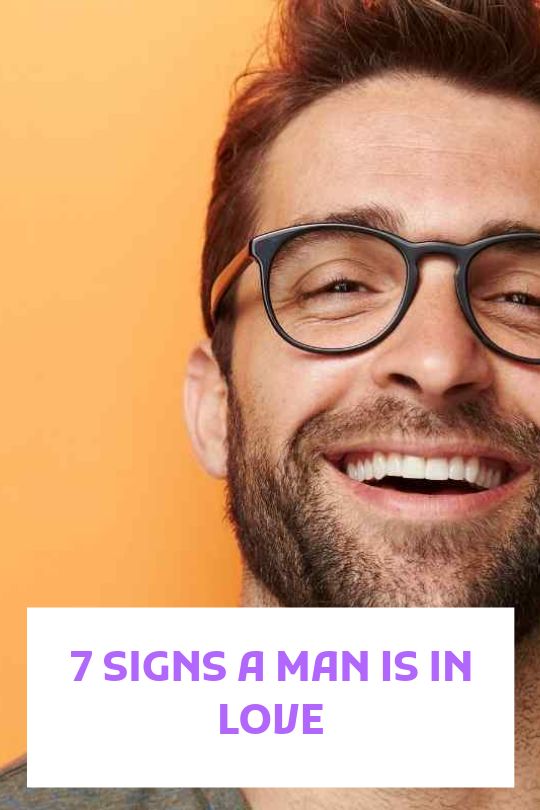