If you happen to be a woman looking forward to marriage (or a long-term relationship with an Aries man, then click over to the article, “Aries man and Pisces woman in marriage”, which is written specifically for you.

So, let’s go on with it…The Pisces woman is the damsel in distress. She lives as if she’s the princess in a fairy tale. She is very sensitive and can get lost in daydreams. Though don’t underestimate her as love has no bounds with her. She tends to be a martyr and fights with forgiveness. The Aries man will be her polarity since he is the first sign of the zodiac and she represents the last.

The Pisces woman and Aries man in marriage can be amazing but not without effort. The Pisces woman might be too sensitive for the Aries man. Though if he learns to be gentler with her, he will feel satisfied as a man. She will treat him like a king and will have great respect for the person she loves.

When the Pisces woman and Aries man start dating, they will discover there is so much to talk about under the sun. They are both supportive of one another and can even make great friends. There might be struggles understanding each other at least at first.

The Aries man teaches the Pisces woman not to hold on too much to things as nothing really lasts. The Aries man is future-forward and can be too blunt for the comfort level of the Pisces woman. She teaches him that there is more than the moment and provides depth to the mundane activities of daily life.

She may also infuriate the Aries man when she is busy at her pity party. Over time, the Aries man realizes that the Pisces woman does have her own resilient strengths. The courage to forgive and to sacrifice in which he may have trouble to imagine for himself since he has always prioritized his own wants.

As they say, no one can forget the love of a Pisces woman. She loves beyond what is expected of her even if people may say she is foolish. She chooses to see the good side of anybody. However, if there is one thing you need to know about her, she is either the most loyal partner or someone who hasn’t made up her mind on who to choose.

For more details about “Dating a Pisces woman… and the 12 things you need to know!” click here.

She makes love from the soul and he just wants to rock and roll. The Aries man is a physical lover and the Pisces woman completely surrenders herself to her lover. She trusts him completely and tries to please him in any way.

The two can be very sexually active but if the Aries man is not careful, she might change her mood midway so instead of just being playful it can end up in resentment. The Pisces woman has a curiosity so she will be open to experiments given that she trusts her lover to take care of her.

The Aries man needs to humble himself that he has a partner that he can basically mold into anything he likes but there’s a reason she is said to be an escapist because rubbing her the wrong way will literally cause her to disappear from his life.

For 7 Steamy tips to turn on your Pisces woman in bed, click here!

The Pisces woman and Aries man make excellent friends. They’re also cute together. The feminine and creative Pisces woman paired with the jock and athletic Aries man. Their personalities may clash but they also complement at times.

These two are capable of being friends for a lifetime as long as they are aware of each other’s boundaries. They will need to realize that giving each other space doesn’t mean they are becoming cold to one another but it’s good to recharge without relying on someone too.

As lovers, they can be very romantic. The Aries man feels like the knight in shining armor and the Pisces woman feels like the Princess that needs saving. It can be toxic but it is the addictive kind. The one Zara Larsson will sing about in her music video, Ruin my life.

For them, whether it works or not, it was worth it. They are mirrors of one another. Their relationship is never rational and is more on what they feel at the moment. Yet, there’s definitely a lot of passion between them. They can’t resist each other.

The Aries man can never find someone who is as tolerant as the Pisces woman. No matter what he does it’s as if she always tries to understand him but of course, everyone has their limitations. It just takes longer for a Pisces woman to give up on someone she loves even if it’s at the expense of her reputation.

The Aries man has to be careful not to take her for granted. He will surely regret it when she finally says she deserves better. Though it’s the opposite and he has always been the fighter and protector for her, she offers him exclusive loyalty and will always put his needs above hers. She will make him feel like a real man as if he’s the king of the world.

Does a Pisces woman and Aries man work, is it a good combination?

A Pisces woman and an Aries man can be a good combination but it will be toxic. There is just too much passion between the two.  As friends, they are adorable and can easily be lifelong best friends. The Pisces woman is very understanding of her Aries man and it’s really up to him if he will fail to see that.

Marriage between a Pisces woman and Aries man, final words…

The Pisces woman and Aries man in marriage are unforgettable. The issue of it lasting for life is mostly up to them. There is a lot of passion in the relationship and they can’t help but care for one another. The Pisces woman is capable of great sacrifice and patience. She is one of the few people who can tolerate the Aries man’s behavior.

Though this is not with limits. Even if it means she takes longer than most, she can disappear. The Pisces woman makes the Aries man feel like the luckiest man in the world. She is submissive and faithful to him. The only thing she asks is that she is safe and protected from him. To feel that he loves her.

The Pisces woman may be too sensitive for the Aries man’s comfort but if they can get past those. It truly has the potential to last. If somehow, they didn’t work out, they tend to be the old people in movies that couldn’t forget that lover to the point that their grandchildren even know. In this case, it’s always up to the Aries man to realize the Pisces woman’s worth before it’s too late.

And finally… Check out my FREE eBook, click here to download the eBook, for insights into dating and the female mind. 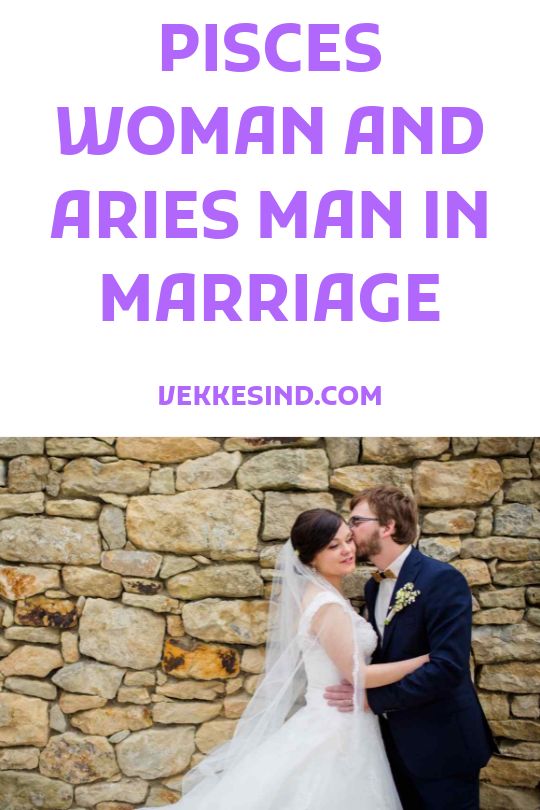