If you are a Pisces man exploring the possibility of marriage to an Aries woman, then the article, “Aries woman and Pisces man in marriage” is written specifically for you!

Ok, that said, let’s get going… The Pisces man and Aries woman are supportive of one another. It makes for a happy and romantic pairing which keeps them coming back for more.

The Pisces man and Aries woman in marriage may seem unlikely but when it happens, it is full of love and affection. They complement each other’s qualities and balance what the other lacks. It is a relationship between a compassionate gentleman and a brave, aggressive woman. Together, they can turn dreams into reality.

For even more information about your Pisces man, check out “Pisces Man Secrets“. That said, let’s talk about the Pisces man and Aries woman dating!

They might seem like lovers with contrasts, but it’s nothing to be concerned with. The Aries woman can lack emotional depth at times because she is all about taking action. The Pisces man is able to get through her walls and allow her to express herself without awkwardness.

It feels like when the Aries woman is with the Pisces man, she can heal her inner child. The Pisces man is nurturing and always has a welcoming presence. He tends to be emotionally attached and clingy with his partner.

He may have struggled with his femininity because men, view it as a weakness but actually, his strengths have more to do with understanding and validating the people in his life in which the Aries woman craves.

In love, they can get lost with one another. They need to be able to communicate their expectations and boundaries so that they avoid unnecessary conflict. The Pisces man can help the Aries woman be more aware of herself on a soul level and the Aries woman can awaken the boldness of the Pisces man.

For more details about “Dating a Pisces man… and the 12 things you need to know!” click here.

The Pisces man feels like he’s in a different plane of existence when he makes love. Truly, he is a martyr, he often sacrifices his own happiness just for the person he loves. He should be careful not to be pushed by the Aries woman who may feel too demanding for the Pisces man.

Though, when they do hit the spot where they understand one another’s needs and the Aries woman is able to respect the Pisces man in bed, then the fire and water elements in them can truly result in steam. He will make her fantasies come true and she will make sure she keeps up.

For 6 Steamy tips to turn on your Pisces man in bed, click here!

These two make great friends, especially if they would share the same interest and meet through a similar social circle. They can teach each other life hacks and how to approach the areas where they may seem weak.

The Pisces man is intuitive, he can sense when the Aries woman is not like herself. He understands why the Aries woman can be moody which is normally due to feeling insecure. He knows that when she is too aggressive, she may actually feel fearful. Though, the Aries woman, with her pride, will never confess it.

The Pisces man can lose himself when he loves his Aries woman. If there is a competition for sainthood in the zodiac wheel, then Pisces can take home the crown. Even if they have divine tolerance and incredible patience towards the people he loves, especially his lover, he does have a limit.

The Aries woman may need to be careful not to push the gentle and docile Pisces man because once she crosses his boundaries, then she may never feel the same warmth and love that he gave ever again. Everything has a consequence and hopefully, it shouldn’t be regretful.

Maybe before they decide to be together, they may have been friends. They might have allowed a few dates here and then before they took it to the next step. The Pisces man encourages Aries to chase her dreams and she motivates him to take the leap.

The pairing is supportive but there may be a fine line. Aries can become frustrated with Pisces if he allows himself to drown in self-pity and excuses. The thing is, Pisces can be escapists at times. She would need a lot of patience to keep him from being too overwhelmed and remind him that good things take time and hard work.

If it’s the other way around and the Pisces man has already matured. He would say to his Aries woman, not everything revolves around you, and that she needs to understand people have feelings too. The relationship between the two of them can feel karmic, there’s a strong pull that keeps them from staying apart.

Check out “Pisces Man Secrets” for everything you ever wanted to know about your Pisces man… (but were afraid to ask!)

Does a Pisces man and Aries woman work, is it a good combination?

The Pisces man and Aries woman make a good combination but it seems like a relationship that’s strong only in the beginning. They are still polarities. The challenge arises when things get tough. It would depend on how mature both the Aries woman and Pisces man is to determine if it will be a love meant for a lifetime.

The Pisces man and Aries woman in marriage can be moderate. There’s a strong attraction especially at the beginning of their relationship. These two complement each other’s strengths and weaknesses but there may be a few bumps on the road ahead.

The challenges can start with the Aries woman’s demands. She may be too pushy or bossy to the meek and gentle Pisces man. The Pisces man is selfless, always puts the happiness of others above his, but if the Aries woman does not realize that he has a limit, then she will never feel the same devoted love that only a Pisces can give.

Together, they make dreams into reality. The Pisces man who can be an escapist at times is challenged by the Aries woman who wants to show him that it is possible but it just takes work. There might be a lot of patience needed on the part of the Aries woman because he may not always approach things directly.

The highlight of their marriage has both wanting the other to be happy. They want to be supportive of each other. This is a pairing that has a lifelong learning process. It works when there is give and take. There’s definitely care when it comes to each other but it’s up to their willpower to make it until the end. 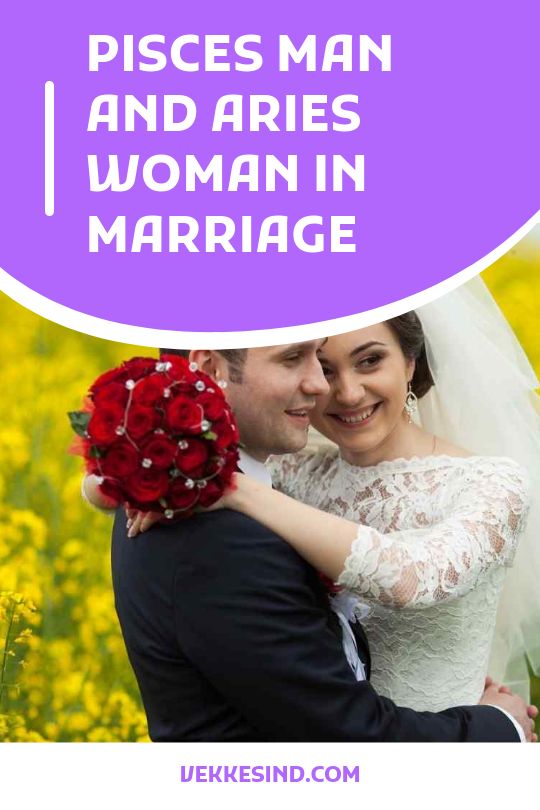