If you are a Libra man that is married to (or in pursuit of) an Aries woman, then this article, Aries woman and Libra man in marriage was written for you.

Whether or not they take their relationship to the next level, the Libra man and Aries woman can always count on each other as good friends. Libra is a master of relationships and diplomacy whilst the Aries woman is independent, read below on what makes this combination work.

The Libra man and Aries woman in marriage is a push and pull. They are polarities and may either balance or frustrate one another. Neither of them reacts too much to unnecessary issues which helps them focus on their own lives. Their relationship will last if they have met at the right time of their lives.

For more info about a relationship with a Libra man, check out “Libra Man Secrets“.

The Libra man is all about love and harmony. The Aries woman is about independence and taking charge. This means, for the areas that Aries lacks such as being sensitive to others, the Libra is great at. They are a couple that can learn a lot from one another.

They could have attracted each other emotionally. Like the magnet, opposites do attract when it comes to these two. The Libra man and Aries woman can be romantic. They are the type of couple that will do things together such as going to work together, washing the car together, or taking turns in walking the dog. The Aries woman will find the Libra man attractive.

When conflict arises, it would be the Libra man that can have difficulty. While the Aries woman has no issues telling people what’s on her mind, the Libra man has a sense of needing to maintain peace, he would try to understand the other person’s perspective and compromise. It is only until there is a sense of unfairness before he starts to complain.

The Libra man may be on the losing end when it comes to aggression, but they are not to be underestimated either because it’s different when they snap. They may not fight through muscle or verbal exchanges but they can manipulate the people surrounding them to their will.

For more details about “Dating a Libra man… and the 12 things you need to know!” click here.

Most Aries-Libra couples agree that their sex life is always great. The Libra man will enjoy being desired and giving pleasure to the Aries woman. She believes in giving her all in everything. Most likely she would take charge of everything while the Libra man can just relax and enjoy.

Though that’s not to make it seem like the Libra man is a submissive, he is extremely passionate and once he has grown comfortable enough can level the field with the Aries woman. They have a lot of energy they want to spend on each other.

The Libra man will spend time admiring the beauty of the Aries woman, he is also deeply romantic, so he gets to be in both worlds of the playboy and the sincere lover boy. There’s a doubt if in that moment if the Aries woman cares enough to reciprocate. She could already be lost in the moment and just wants to have all of him.

For 6 Steamy tips to turn on your Libra man in bed, click here!

The Aries woman will teach the Libra man to be more authentic. The thing is since Libra always puts others first or thinks about how others would think of them, they don’t always get to express their true selves, this is an area the Aries woman does not care too much.

She will be able to teach him how to be braver and to encourage him to be firmer. She will teach him how to live in the moment when Libra is busy finding all the reasons and patterns on why someone can hurt anyone.

There’s a conversation that the Libra man and Aries woman can make great main characters in a sitcom. They would give out an energy of love and hate. Though they get frustrated with each other, they just can’t stay away for too long.

When it works, it works, but when it doesn’t it doesn’t. This is a love match that shouldn’t be forced. There could be issues when it comes to trust. The consensus would agree that both signs may be a bit too flirtatious without realizing it.

It’s important that both signs can appreciate one another. Communication may not be their strong point but for some reason, they have a natural understanding of what they’re feeling. It is an image of I understand but can’t tell you or don’t know-how.

The Libra man in love most likely did not rush into the relationship. He might be the sign of partnerships, but he makes it seem like he doesn’t want to be committed.

Does a Libra man and Aries woman work, is it a good combination?

The Libra man and Aries woman can be a great combination but only if the differences do not sabotage the relationship. If they can find a middle ground between being alone and independent and unification then there’s no stopping them.

Check out “Libra Man Secrets” for everything you ever wanted to know about a Libra man!

The Libra man and Aries woman in marriage will enjoy a great attraction at first. They are polarities. Just like magnets, they can’t really get away from each other. Marriage will only last if they have a strong foundation and deep romance.

They can teach each other different perspectives. This may either frustrate or inspire the other. The Libra man and Aries woman have complementary strengths and can help each other where they are weak.

Both of them will enjoy making love to one another, they are the couple that as time passes, it never gets boring but may even get better or more experimental. Trust may be an issue since the two signs have flirtatious personalities. The Libra man knows how to use his charisma and the Aries woman usually gets what she wants.

Even better is that they don’t take their relationship too seriously especially at first. They are able to satisfy their own need for freedom. When they do commit, it’s usually because they have already thought about it and they do see this person as someone they can be with for the long haul.

Communication will be important to keep it long-lasting as well as staying true to their word. The Aries woman needs to learn to be gentler and the Libra man will now learn assertiveness from her. It’s a marriage that doesn’t sail smoothly, which may take effort but has its merit. It’s the kind of union that even if it doesn’t work in the end, they inevitably became catalysts to be better versions of themselves. 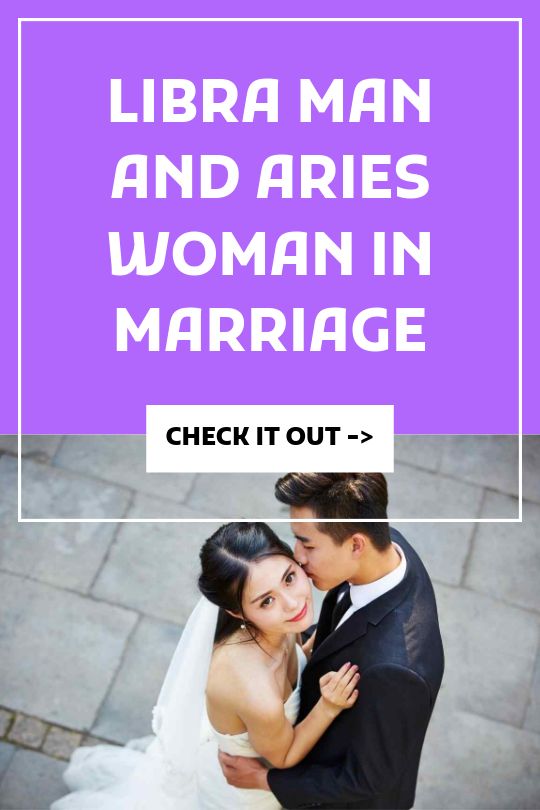