If you are a Leo man reading this and is curious about what it’s like to marry (or have a long-term relationship with a Taurus woman, then proceed to the article, “Taurus woman and Leo man in marriage”, which was written for you.

To start things…The Leo man is ruled by the Sun, the planetary symbol for expression and the authentic self. He is symbolized by the lion who is courageous, associated with pride but reigns in regality. He puts himself in high regard and may have trouble accepting criticism from time to time.

The Leo man and Taurus woman in marriage will be moderate to challenging. It’s not exactly a relationship full of bliss. They can be successful but sometimes there can be a disconnect on how they handle things. There are even suggestions to avoid this idea altogether to save yourself from frustration.

They say life is boring without challenges and the same goes for the Leo man and Taurus woman dating. The Taurus woman and Leo man are already different when it comes to their perspective. Seeing eye to eye might not be normal when they’re together.

It’s not helpful that the two of them can be stubborn too. Though they share a fixed modality which means they respect one another in the regard that they’re both persistent and determined people. Individually they make loyal and devoted partners but it’s a relationship that shouldn’t be forced.

The Taurus woman is not the type to brag about any of her accomplishments. The Leo man, however, wishes for compliments. He needs someone who can feed his ego which can irritate the Taurus woman at times.

One of the ways that can make this partnership work is if they share the same goals and are aligned with what they want. They can actually become a power couple that way. It would also flourish if the Leo man focused on his romantic gestures and wait for the Taurus woman to appreciate him then he will get compliments even when he does not ask.

For more details about “Dating a Leo man… and the 12 things you need to know!” click here.

When it comes to their intimate life, the Leo man and Taurus woman love to be close. Though their sexual needs may be different. The way a Taurus woman would handle being intimate is conservative, she is reserved and takes it slow. The Leo man is more passionate and adventurous, just like a lion in search of prey. They may struggle to find a middle ground to keep each other satisfied. Not unless the Taurus woman is comfortable being a little more playful. But yes, they will get it done.

For 7 Steamy tips to turn on your Leo man in bed, click here!

Even though the Leo man and Taurus woman can be full of differences, it doesn’t mean they can’t make good friends. Though there will be debates every now and then. They will enjoy mutual admiration and their common goals of achieving success through the way they can approach this may not be the same.

The Leo man loves to be the center of attention but the Taurus woman is chill about it. Oftentimes, the Leo man feels like his kindness is taken for granted but since he has high self-respect, he has no issues walking away from a relationship that is one-sided, including his friendships.

The Leo man and Taurus woman as friends are loyal to one another. Maybe they’ll never agree to each other’s ideas but it’s possible for them to agree to disagree. They might surprise one another with gifts from time to time as one of the only ways they can express they care without making it too awkward or too much for their pride.

In love, they can be a hot-tempered couple. They know how to enjoy life. They work hard and play hard. The Leo man will nurture the Taurus woman’s creativity if she is not so resistant with her structure, plans, and rules.

When it comes to finances, the Taurus woman is more reliable than the generous Leo man. So, there might be a clash when it comes to that. The Leo man will expect to be the one who wears the pants in the relationship which the Taurus woman may not complain about unless he’s being irresponsible in showing off rather than focusing on their objectives.

Despite sharing the same fixed quality, they are opposites in the sense He is masculine and she is feminine. If the two of them can leverage their strengths they can balance one another. Though sometimes it doesn’t work as intended and it can throw the other off and seem too much. So, they have to make an effort to mirror each other’s qualities to make it bearable.

Pursuing a relationship with a Leo man may feel like a push and pull for the Taurus woman. It is similar to having a family member you love and can’t neglect but sometimes can act too much to handle. This is a relationship that takes effort but is full of loyalty.

As long as they are committed to one another, it is unlikely the other will cheat. The Taurus woman needs to embrace a little bit of excitement and changes for the Leo man to be happy. Some lovers really do prefer to have drama.

Check out Leo Man Secrets, to learn everything you ever wanted to know about your Leo man.

Does a Leo man and Taurus woman work, is it a good combination?

The Leo man and Taurus woman is a moderate combination when it comes to being friends. In love, it can be a challenging relationship, they just have friction to them. They are akin to the family member you loathe but can’t leave and take care of anyway. It is an unconditional love that’s frustrating.

Marriage between a Leo man and a Taurus woman, final words…

The two share the modality of being fixed signs. These are determined individuals and have the reputation for being firm with their opinions. The Leo man will expect to be the one to lead and the Taurus woman will not really contest.

They need to focus on communicating better and adjusting to who they are as a person. They can either rely on accepting the other as they are or be patient enough that change takes time, especially true with the Taurus woman.

Their love dynamic is like the toxic family member you complain about all the time but you love so much and can’t leave. In a way the love is unconditional but it is full of drama. This relationship is not for the faint of heart or weak-willed.

The amazing thing that they can have with this tandem is that when both signs are mature and giving of one another, they really can become a power couple. When they are able to make it work, it’s most likely to last for a long time. 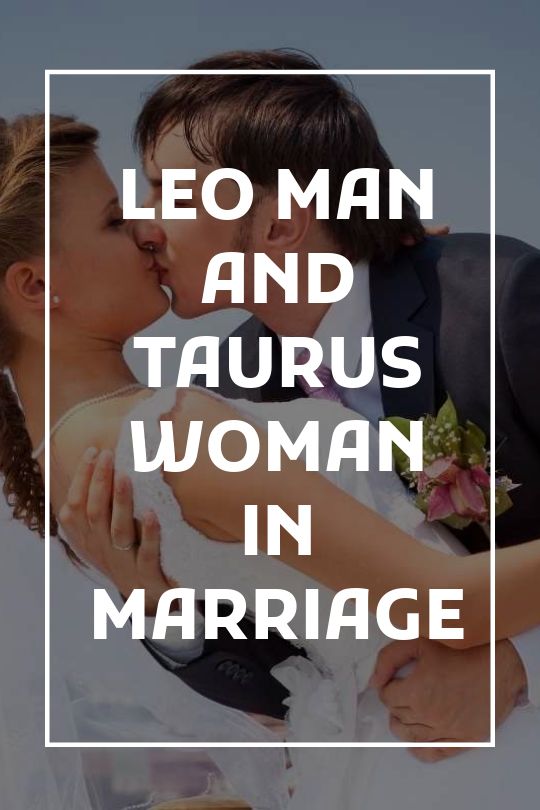