If you are a Leo man that’s searching for tips on marriage to (or a long-term relationship with) an Aries woman, then read, “Aries woman and Leo man in marriage”, because it’s written specifically for you!

OK, let’s get going… The Leo man is a fire sign like the Aries woman which means they are both extremely passionate, action-oriented, and dominant.

To learn everything you ever wanted to know about a Leo man, check out “Leo Man Secrets“.

The Leo man and Aries woman are both very loyal signs. When dating, they will be adventurous and extroverted. They will love being outdoors. As two dominant signs decide to collide, there might be issues about agreement since the Leo man always wants to take the lead, especially in his relationships.

The Aries woman loves her Leo man’s generosity and big heart. She enjoys the jokes and comments he can make about anything. She respects her Leo man and the Leo man has a genuine admiration for her. If only they can take turns wearing the pants then a lot of arguments would be resolved. They need to be mindful of each other’s wishes.

The Leo man tends to be more stable. The Aries woman may have complaints on how he is too cozy and that she is the type to jump from one thing to another, which may frustrate the Leo man.

For more details about “Dating a Leo man… and the 12 things you need to know!” click here.

They are able to fulfill each other’s desires. They are sexually compatible. The Leo man and Aries woman have insatiable sexuality that’s off the charts. For the two of them, lovemaking will be experimental, competitive, and primal. The Aries may be a woman, but she would try to make him call her daddy.

The Leo man in the bedroom would want to amaze the Aries woman, and she just loves that. It is unlikely that their sex life would become boring when you have someone who likes putting on a show and the other feels special because of it. Even when the relationship has gone long-term, many Leo Aries couples that it just gets better as time goes by.

For 7 Steamy tips to turn on your Leo man in bed, click here!

Their friendship will be full of warmth and will never lack excitement. The theme of their friendship is having adventures together. However, these two can be extremely opinionated. They have definitely met their match; the good news is they don’t allow themselves to remain angry for too long.

They might have an issue with their dominance. The two of them want to be a leader and might come to compare each other to who does it best. This might push them to arguments. The Aries woman should be careful not to offend the Leo man as he does tend to have a fragile ego.

The Leo man and the Aries woman take their commitments seriously and can be loyal to one another. The Leo man in love likes to spoil his Aries woman, he is protective and caring towards her. He will always encourage her and point out what she’s doing right. He is a ray of sunshine towards her especially when pressure may put her down.

The Aries woman may not like that the Leo man can become possessive of her. The Aries woman likes her freedom and doesn’t want to be told what to do. She may not want to admit it but it’s difficult to forget a Leo man’s love. She will look for the way she was spoiled by him.

It’s important for the Leo man and Aries woman to be the best partner in each other’s life. As two fire signs, they totally understand one another and the way they speak is less likely to offend them because they get where it’s coming from.

The downside is too much fire can be too hot to handle, their egos might get in the way. The Leo man may struggle because he looks toward being admired by the Aries woman. He needs a lot of encouragement or praise from his partner. If the Aries woman cannot give this, then the Leo man may start wondering if he really does have the best partner for him.

The thing is Leos are loyal and they’re reputed for that, but it’s the type of loyalty when they’re wanted. He is protective, yes, but like the lion in the wilderness, they don’t like being perceived as weak. He knows his worth and though he won’t be the one to initiate, he knows he can do better.

Does a Leo man and Aries woman work, is it a good combination?

Check out “Leo Man Secrets” for everything you ever wanted to know about your Leo man!

Marriage between Leo man and Aries woman, In summary…

The Leo man and Aries woman in marriage tend to be straightforward. Many can attest that this can be an excellent match. Though of course, there will be exceptions. Their happy ending relies on being able to tame their egos. Sexually, physically, and emotionally they truly get each other. The Aries woman and Leo man are both leaders and dominant personalities.

They can be a power couple if they tried. The Aries woman will appreciate the generosity and possessiveness of the Leo man but there might be concerns about jealousy. Trust won’t be a huge issue since both of their communication styles are direct and bold. They say what’s on their mind as it is.

The key in making sure the marriage is long-lasting is being able to give one another space and freedom to pursue their own goals. If their goals are aligned then they could be unstoppable. The Leo man wants to be at center stage with the Aries woman’s heart, if she is able to reciprocate this, then he will surely spoil her and treat her like a queen, failing to do this, may eventually lead the Leo man to question the union and wonder if he deserves more. 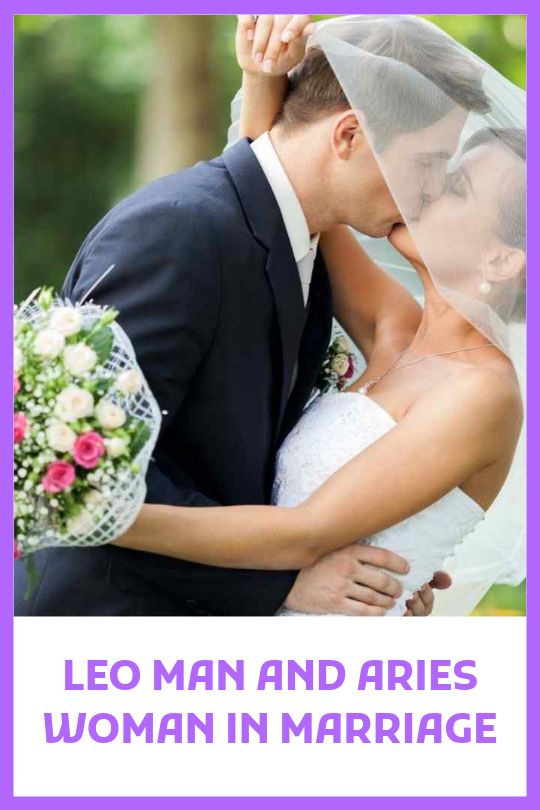