If you are interested in an Aries man, then you need to know what makes him tick.  So how do you attract an Aries man?

An Aries man is attracted to a strong, hardworking, and determined woman.  He is a traditional romantic, so show off your feminine vulnerability, give him a laugh and let him chase you.

Why an Aries man is so impressive?

Aries man is impressive because he is the role model for the “real” masculine man, who stands alone against everything and everyone. He might appear calm and even silent in some cases, but the sense of pride and purpose are burning inside of his soul.

The Aries Sun burns inside the Aries man which makes him the strongest in the whole Zodiac circle.

As you might know already, there are four main elements in astrology from which all Zodiac signs are derived. Those elements are fire, earth, air, and water. And Aries belongs to the fire element. It represents its beginning and therefore, all ideas and creations emerge from this sign.

Any celestial body found here will be under the strong influence of the fire element. And for some of them this will mean reinforcement, while for the others, this strong fire can damage them. However, the Sun will become exalted in Aries, meaning that the will or the ego of an individual will express itself in the most powerful way possible.

Having a strong ego won’t necessarily mean that he will parade with it all the time. And in this sense, he could appear to be extremely calm, but his ideas, willingness to lead, and create breakthroughs in anything will become his trademark.

What are the main traits of an Aries man?

The sign of Aries is very impulsive, combative, moody, passionate, and most of all in the world, he hates monotony, boredom, and the usual routine that life brings. Because of these, he needs a strong stimulus at all times, especially when he is younger. As a person, he is just and loves action and praise, and of course, easily imposes himself on others.

In him there is this innate need to be first, to be alpha male in every situation. After all, other men will let him dominate if he is the loudest in the crowd, counting on the fact that in those truly risky or dangerous situations he will be the first one to face the difficulties that others have a hard time coping with. And as a rule, it will be so.

Even if his faster-moving planets like Mercury and Venus are positioned in other signs, like Pisces or Taurus, his mind will still be super-active and he’ll be brimming with ideas on how to conquer the world, the industry, or his environment, depending on his true influence.

If the ruler of his natal Sun, the planet Mars, as a ruler of Aries, is placed in fire or air signs, he will surely have all the luck he needs and then it will so easy to accomplish his dreams. On the other hand, if his natal Mars is placed in water signs like Pisces or, especially, Cancer, then he will show some self-destructive tendencies and become his worst enemy.

How to attract the younger Aries man

Playing the “damsel in distress” is the classical or rather to say, traditional type of game between men and women. However, an Aries man is born to save and protect, and this fact should be used to your advantage.

Once upon a time, a lady would “accidentally” drop her handkerchief. and the knight in shining armor would naturally pick it up. Consequentially, this gesture would always lead to conversation, her gratitude, their introduction, and his willingness to offer his protective services in the future.

This is exactly how the game should be played with an Aries man, but having in mind different circumstances and conversations in our day and age. You must create the situation where something fell out of your hands, you slipped, and you are currently desperate or something similar.

Just think of yourself as a wounded little bird, and momentarily, an Aries won’t be able to resist. He will approach and naturally, offer his help.

And this will create the “it’s now or never momentum” because your words, your fragile smile, and your dreamy eyes, especially your dreaming eyes must be focused on his eyes. Emit the energy “oh, how wonderful you are” and you will have him almost done. If he is single and available, he will continue the conversation, you will begin with the gratitude and then continue with some safe questions.

If he seems like a shy guy, that means that his natal Venus is also placed in Aries, then you can politely ask for his number, having in mind some interesting event you hope to take him on because you are, naturally, still so grateful.

Let him think he is pursuing you

The trick is to pursue him, but not so obviously. And don’t try to wear the mask of a dominant, manly type of woman because that will surely create repulsive effects. No, you must act like a calm, elegant, mannered little girl, and this will be your secret weapon to awake his affection.

Remember that the natural partner for Aries is Libra, and act like a Libra, of course. And Libra girl is always appearing gentle, sensitive, calm and all dressed up.

How to attract mature Aries man

When younger, Aries guys can be truly easy to handle. However, as life teaches them many hard lessons, and those emotional ones are the hardest for Rams, they tend to be wiser and not so fast when it comes to love.

Yes, playing the same old and very useful “damsel in distress” game will certainly draw their attention, but you will have to add some other ingredients in the proper amounts to make yourself irresistible to any of the Aries men.

As said the natural partner or Aries is a person born in the sign of Libra. And this person will be recognized with their elegance, mannered behavior, and a sense of diplomacy, all characteristic will which complement the sign of Aries on the other side of the Zodiac circle.

But have in mind that Libras are not naïve at all and they could easily use Aries boyfriend or even a husband to upscale and then find someone who is more socially acceptable, more successful, popular, or richer. And Aries will carry those scars of betrayal for a long time in his soul.

In this sense, if you meet an older Aries and he is not married yet or he is divorced, then you will have to add something more, and yes, better, to your Libra type of approach. And those secret ingredients are acting like a noble Leo queen and teaching through joyful action like a Sagittarius lady.

You can approach him freely, but act as if you are more interested in his persona and his friendship than the mere romance. And then and after, you have to be calm, but royally, just and “out of this world”. And also, you should show him the adventurous part of your soul talking about traveling, studying all sorts of subjects, and naturally, showing your high moral standards, so he can feel safe to open up his heart after a while.

Can you seduce an Aries man?

As a man, Aries is very determined, strong-willed and masculine, and knows exactly what he wants. In fact, and in most cases, he thinks he knows what he wants. And this trait will open the exact space for you to seduce him without his conscious knowledge.

Have in mind that his natal Sun is exceptionally strong, so as a man, he expresses himself without any problem. However, what he likes or loves belongs to his natal Venus and Moon, and the feminine principle in him is very vulnerable and prone to all sorts of manipulations.

Having in mind that the planet Venus is never too far away from Sun, for an Aries man, this goddess of pleasure can be placed in Aquarius, Pisces, Aries, Taurus, or Gemini. As far as Gemini and Aquarius signs go, he will then be prone toward talkative and rather youthful-looking ladies without too apparent feminine attributes.

Regarding Taurus and Pisces placements, his desires will revolve around sensual, extremely feminine, and mysterious girls. And if his natal Venus is placed in Aries, he will feel a bit clumsy in love. An Aries man will then fall for sporting types, masculine and a bit rough girls with the lighter complexion, hair, or eyes.

Interestingly, the Venus in Aries is the only case in the Zodiac wheel where a man is openly pursued by the woman, and where confidence and even shocking openness play a major role in the game of love. This is why he can be a really easy target to conquer. 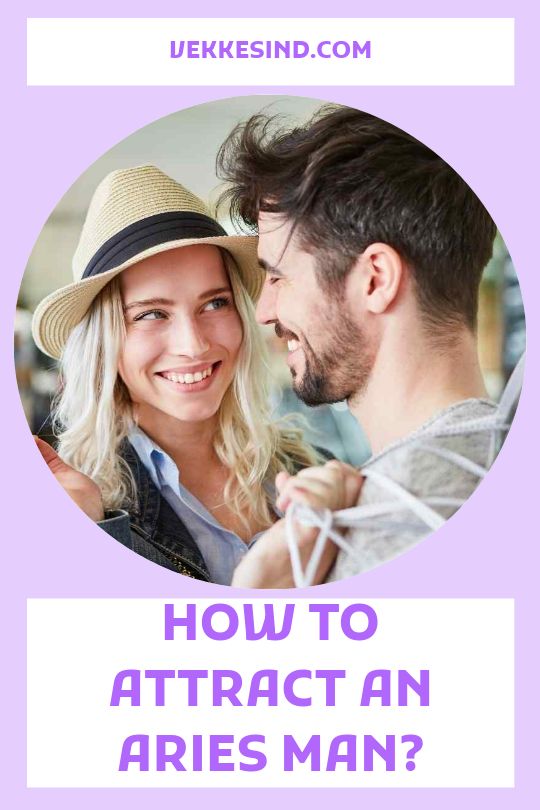