Taurus is the next stage of creation, from Aries who was all about “I am”, now the focus moves to “what is mine”. This has the grounding effect too, connecting the person with their personal space, face, belongings, and the way to express the first fundamental principle of creation – the sound.

You will attract a Taurus man by looking feminine and acting in an elegant manner. This sign represents the emanation of a grounded or down-to-earth type of man. He is always rational, practical, and frequently quiet. However, once he finds someone attractive, he will become very stubborn to seduce that person.

If you wish to pursue a Taurus man, then you must also understand that a young Taurus man will behave and be attracted to slightly different characteristics compared to a mature Taurus man!

If you are looking for more in-depth training to attract and keep a Taurus man, then I’d suggest you check out “Sextrologist” and zodiac-based dating expert Anna Kovach’s book Taurus Man Secrets.

Before diving into the different ways to attract your Taurus man, let’s talk a little bit about the myths of a Taurus man…

Why a Taurus man is so stubborn?

A Taurus man is not stubborn per se. Truthfully said, he might be rather slow, which doesn’t mean that he can’t possess a brilliant mind. He just needs more time to evaluate things, and he hates any change, especially related to home, his love life, and his finances. This is why he seems hard and stubborn.

There are four major elements in astrology, fire, earth, air, and water. And according to this division, the sign of Taurus has the earth quality. Taurus is, therefore, all about concretization, and the “materialization” of ideas created in its preceding sign – Aries.

And in this sense, any planet or luminary found in Taurus will slow down a bit, ground, and take some time to value and revalue any action before it’s time to actually act on it. For some of those bodies, the earth quality of Taurus is extremely beneficial. However, for some of them, like Mercury, Mars, or Uranus, this placement will feel awkward or at least, frustrating.

The ruler of this sign is the planet Venus, and since it belongs to the earth element at this place, it will be about the values in general, possessions, face, skin, speech, neck, throat, lower jaw, lips, and nutrition intake. Also, the Moon exalts in Taurus, meaning that the soul is filled with joy when there is plenty of food when the home is safe, prosperous, and beautiful.

This is why a Taurus man could appear to be very stubborn. It’s not that he doesn’t want improvements, he does, indeed. It’s just that changes can seem frightening and risky. But, once he realizes the clear benefits of future actions, nothing will be able to stop him from accomplishing his dreams.

What are the main traits of a Taurus man?

The Taurus man is rational and persistent and prone to prolonged periods of thinking. However, he is not too ambitious, and if the “goal” demands from him to “sell his soul for the position”, he will never accept it.

In addition to his work or career, this man will give an equal amount of energy to love. And in order to really succeed in his career, he needs something powerful of an emotional nature to guide him because he is very emotionally sensitive and needs support. Even if he needs to take some radical actions and create the change, he will always do so for the sake of loving or protecting his family or those he truly loves.

Sometimes he can be very melancholic, secretly remembering his “failed” love episodes from the past. But if we neglected that part, the Taurus man is the best husband of the whole Zodiac circle. He will always be very attached to his wife, and in some cases, it is possible that he will be pathologically jealous, too.

On the other hand, there are cases of Taurus guys who cheat on their wives, but for them, those are only passing adventures, without any deeper meaning. In general, Taurus is the type of man that a woman can always rely on because he is good, noble, cheerful, and optimistic, and of course faithful to his family.

Besides the fact that a Taurus man will most often marry a person from a higher class in society, in order to draw attention to himself on the path to success. And he usually likes more neat, beautiful and elegant women.

Can you seduce a Taurus man?

Of course, you can seduce a Taurus man. You will have to use the traditional “formula” by acting politely, having a sexy and calm voice, and taking exquisite care of your clothes, face, and hair. Yes, he will fall for appearance first. But to keep him longer, you should focus on home, the future, and him.

Although Taurus man can appear to be slow and not so emotional at the first glance, his main ruler is the planet Venus and he knows how the love interactions should develop, even at his younger age. On the other side, his natal Venus could be placed anywhere in the signs of Pisces, Aries, Taurus, Gemini, and even Cancer.

When man’s Venus is placed in Pisces, Taurus, or Cancer, then this shows he will fall for sensual and sensitive types of females. If this is the case with Cancer or Pisces, then he will be attracted to lighter types, like blonds or girls with a light complexion or eyes. As per Taurus, he will love brunets with all those female curves and feminine attributes.

If his natal Venus is placed in Gemini, he will fall for skinny, talkative, and joyous younger or looking younger women. However, the special case happens when his natal Venus is in Aries. He will take the passive role and fall for the woman who will pursue him. On the other side, this same position indicates that he might have an extramarital affair with this woman, so if you want something stable, public, and long-lasting, you should avoid pursuing him at all.

Generally speaking, if you want to seduce a Taurus man, you have to look and behave elegantly and with manners, of course, and to frequently position yourself in his environment. He will notice you straight away, and if he is truly interested, he will slowly but steadily “narrow the circle” thinking he is pursuing you.

How to attract the younger Taurus man

The younger Taurus guy will be magically attracted to calm, feminine, and innately gentle individuals almost every time. The only exception is when his natal Venus is in the sign of Aries, and he will then incline toward those lighter, sporting, and somewhat brisk or aggressive types of ladies.

But in all other cases, he will instantly notice your style. And this is not just about the way you wear your clothes, hair, or makeup, it’s about the way you move, how your voice is modulated, do you treat other people with grace and softness. And if you have checked all those points on the list as positive, then you will know for sure that he is amazed by now.

The next phase of your seductive game will be to be close, but not to pursue him in any case. Do not text or talk too much around him. Even if he texts you, don’t answer too fast and try to redirect written communication to real, voice communication at any cost.

Have in mind all the time that the perfect Taurus man’s partner is a Scorpio woman. Therefore, you must act as one. Be moderately, but mysterious all the time, slightly sexy, but with style, and protective toward your “possessions”, carried by your passion for other things in life. And consequently, he will be intrigued by your unique value. And remember, this unique value will be the glue that will attract and then stick him to you.

How to attract a mature Taurus man

The older or the mature Taurus guys will be attracted by a person with an increased sense of practicality, dignity, rationality, and yet, someone who is calm and doesn’t fall into drama so easily, or at all. Also, you will have to have a neat appearance and flawless manners to catch his glance.

While younger, a Taurus man will be relatively easy to attract with the latent sex appeal, elegant style, and well-mannered personality. At this age, he will also fall for popular brands on you, which will constantly indicate that you pay attention to trends and have the means to possess them. But things will radically change as he gets older and more experienced about life in general.

The Taurus man is known as the best kind of husband in astrology, and he will be very protective toward his family and properties, and the chance for him to divorce will be very low. However, those situations do exist, and if you want to attract the older Taurus man, then you shouldn’t just resemble the Scorpio woman solely, although being mysterious, “dangerous” in some sense, and wise, will never harm your reputation in his eyes.

You have to act like Virgo and Capricorn lady too to increase your value in his eyes at this phase of his life. This means that you have to be savvy, practical, and often, critical about the things you don’t like. Of course, you should do that with a certain sense of balance. The main goal here is to show him you are someone responsible and reliable, especially when it comes to common sense.

And also, you have to be traditional, elegant, and with many conservative principles. There is nothing a Taurus man dreads more than being around the “open-minded” woman, meaning she will talk endlessly about any subject, especially those themes or industries she doesn’t know anything about. On the contrary, you have to know and you have to already establish yourself well in those areas you are talking about.

Being fully aware of family, monetary, and property values, looking feminine and with sustained styles, using a calm tone, and not being pushy will ensure his respect at the first glance, and soon after he will start pursuing you as a real gentleman.

As I mentioned at the beginning of this article, check out Anna Kovach’s book, Taurus Man Secrets, for more in-depth training for women who want a Taurus man to chase and desire them. 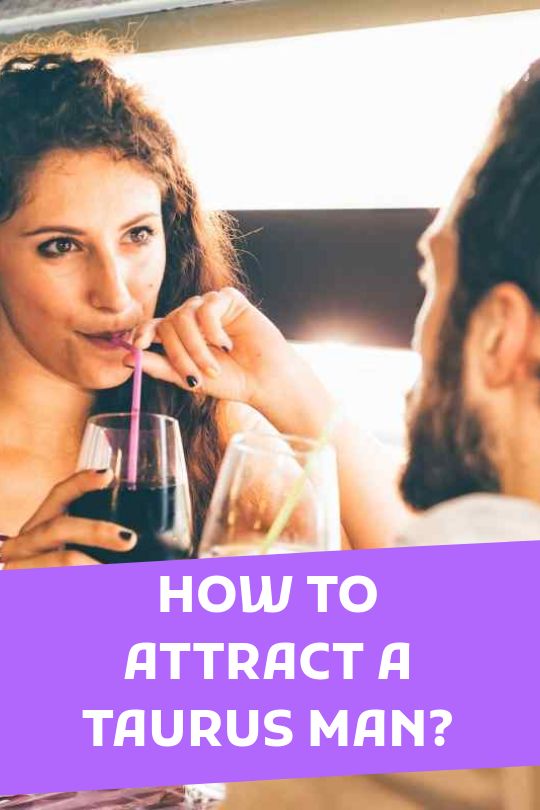