So you’ve met a beautiful man and you’ve been flirting with him a little but how would you know whether he’s genuinely interested? There are a few obvious signs that can give you a clue whether he is interested and flirting with you as well.

If a man is flirting with you, he is physically affectionate and generous when giving compliments. He strives to make time for you and spends time with you since all of his focus and attention are on you. Most of all, your man does anything to make you happy. He goes out of his way to make you smile.

Men can either be straightforward or secretive when it comes to showing their feelings to their object of affection, so this may be confusing. To help you out, read on to know about a Man’s flirting style.

Flirting Style of a Man

A Man may often show his affection and interest through his actions because most of them aren’t really expressive when it comes to words. Nevertheless, their actions can be sincere most of the time when they really make an effort to flirt.

He will have no hesitation about genuinely caring about you and your life and is more likely to experience long-term relationships with strong physical intimacy and emotional connections.

When it comes to winning the game, though, he is a huge success because this person is more likely to be an extrovert and flirts to boost his self-esteem.

While we may not be aware of when others are flirting with us, we are aware of when they are not. Usually, the issue arises from our unwillingness to face the truth that this individual isn’t interested in us and disclose our feelings for them.

Though some people are natural flirters, many of us struggle with the concept of flirting with others, let alone figuring out the various styles of flirting and what works best for us. In any case, being able to tell which flirting style they’re using could help you figure out if they’re not being genuine.

However, there are a lot of clues that a man can give and it doesn’t matter which type of flirting style he uses.

5 Clues A Man Is Flirting With You

One of the clearest and quickest ways to know when someone is flirting with you is through playful touches. While the previous touches were subtle, the next clues are more obvious and go beyond a simple “touch” against your arm.

When you’re walking together, he’ll draw you closer, hold your hand as you cross the street, and toy with your feet when you’re sitting across from each other and there isn’t anything more visible than them. Because he likes you, your man will want to take over your personal space and flirt with you.

It’s not just about the words you use when you’re flirting, since body language plays an important role in communicating. It’s a nonverbal technique to get someone’s attention and a man could provide you with a lot of visual indications that he’s interested.

Playful touches, such as touching your arm or caressing your hair, a specific level of eye contact or prolonged eye contact, small gestures, such as standing very close to you, and daring moves, such as leaning close to you or smiling at you, are all obvious clues he is flirting with you.

Men aren’t known for heaping compliments, so if you’re getting them, it’s possible he means it. The more compliments you receive, the more flirty conduct he displays and if you appreciate him, commend him at some time; it will make him feel great.

Men, like everyone else, want to be noticed, acknowledged, and praised. With that said, celebrate him for who he is and what he has to offer. If you’re unsure whether or not a man is flirting with you, one obvious clue is that he seeks out more chances just so he could compliment you.

Compliments are an important clue to flirting behavior and can help you quickly assess your man’s level of interest. If he’s genuinely interested in you, he’ll compliment you on small details you might not notice such as the little things like a thoughtful comment on your nail color or makeup, or a playful compliment on your new hairstyle that can make a big difference.

Even if it’s not a compliment, be grateful that he’s making an effort and paying attention to even the smallest changes in your appearance.

If he finishes casual chats with other women fast to come back to you, participates in activities that you enjoy, or cancels plans with his male friends to spend time with you, there’s a good possibility he wants to be more than your friend.

He does it because he likes you, wants to be with you all of the time, and he yearns for your presence and wants you to be a part of every aspect of his life.

Men typically aren’t subtle about this since if a man wants to spend time with you or be near to you, he will make it happen. Don’t think he’s being overly friendly; there’s a thin line between friendly and flirting.

He focuses on you

It’s such a big clue that a man is flirting with you and interested in you when he makes time for you and gives you his complete attention. Even if there are a lot of other people around, he’ll make it appear as if they don’t exist.

For the most part, he’ll keep his gaze fixed on you, speak only to you, and listen only to you. And when you speak, he will pay close attention to you and pay attention to whatever you say.

If your man does, he is paying close attention and actually listening to what you have to say. It indicates that he is invested in you and cares about you and he wants to savor every last detail about you in order to get to know you better.

It shows that you are more important to him than you realize and that he remembers every detail about you. If he recalls even the tiniest things about you, such as your favorite color, it’s time to think about turning this into a serious relationship as soon as possible.

He makes you happy

When the man you’re talking to starts cracking jokes in the midst of your conversation, he’s trying to get your attention and make you laugh. This is a clear indication of flirty conduct because he’s just interested to see how your smile changes, or he’s making an extra effort to make you feel at ease.

Keep in mind that when a man tries to make you laugh, he usually wants to make you happy as well. He believes he has won when he sees you pleased and glowing, and he will continue to strive for your happiness.

When you share similar passions, it’s often simpler for both of you to move past the flirting stage and into something more serious. With that said, it’s also easier to date someone with a similar sense of humor. He understands that if he can make you laugh or at the very least smile, he has a chance of getting close to you.

Is a man flirting with you, final thoughts…

The clues that a man is flirting with you are: 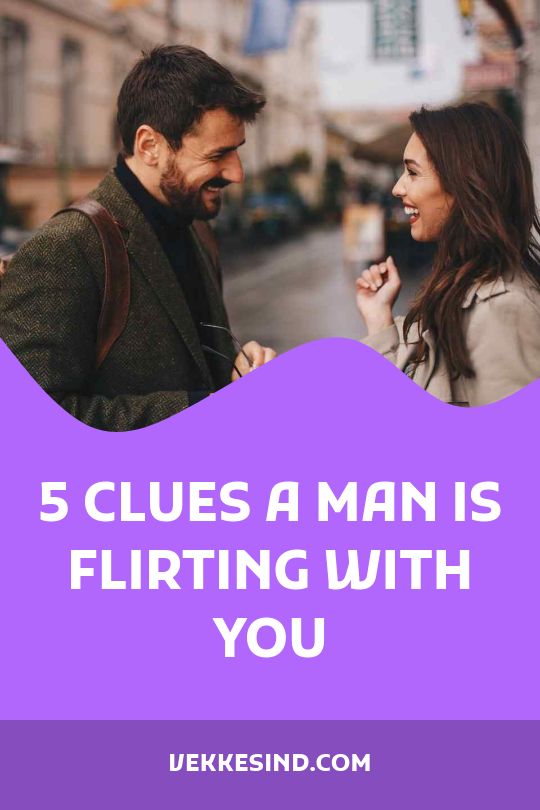