So, that said, let’s get to it… The Capricorn man is ruled by Saturn, the planet of karma, discipline, and limitations. By first thought, they will not be the type of people who are fun to be around but they do have a side to them. He may come across as emotionally awkward or distant and the way he shows his love is through service and gifts.

The Capricorn man and Taurus woman in marriage works very well. They might not be the most romantic couple but they have a mutual understanding and desire to build a life. The two-share ambition, and because of their affinity to earth, drama is less likely to happen between them.

Most likely, the Capricorn will be happy that the Taurus woman is not as needy compared to the other signs. He likes that she is independent and easy to please. The Capricorn man may be awkward emotionally but the laid-back personality of the Taurus woman makes him comfortable enough to keep hanging around.

When the Capricorn man likes the Taurus woman, he will become flirtatious. The seemingly reserved and shy man becomes playful and full of life. He will let her into his private world. He is a man that is affected by how people perceive him, not everyone gets to see a side of him that is vulnerable.

It is unlikely that their partnership will be prone to drama. Not only do they prefer to be transparent, but it is also more of since they are both practical signs, they might not be able to make time for each other. They need to be careful not to neglect the other as time is still a love language.

The Taurus woman will be happy in the arms of a Capricorn man because, like her, he is predictable. He is able to provide him comfort that he’s dependable. If anything, Taurus is not the sign that likes change that’s why the consistency of a Capricorn man is great.

For more details about “Dating a Capricorn man… and the 12 things you need to know!” click here.

As lovers, the Taurus woman and Capricorn man have the same desires. They want a cozy and comfortable environment, not shutting off the lights completely, maybe some candles to make it romantic.

The two of them will take it slow, but once the Capricorn is comfortable enough, he might offer to take the lead. He wouldn’t be the type to deny the Taurus woman that either, after all, he’s the boss. The Taurus woman might want to make him feel relaxed before they do things, as the Capricorn man always seems stressed.

For 6 Steamy tips to turn on your Capricorn man in bed, click here!

When it comes to the compatibility of their friendship, the Capricorn man and Taurus woman score high because of similar values. They also share the same element which means it’s easier to understand the motivation of the other.

As friends, they will keep it practical and realistic. They say things as they are. They might be the type of friends to motivate one another to be successful. If there is love language between them as friends, it might be they can take the other out for dinner and give fancy gifts when they can.

These two are materially motivated. Another thing about their friendship dynamic is that the Taurus woman is a fixed sign so she is determined to make things happen which also makes her stubborn to a fault. The Capricorn man, being labeled the CEO or boss in the zodiac, likes that she is independent and sees her as a reliable companion even if things will get tough.

In a committed relationship, the Capricorn man and Taurus woman get along very well. Their bluntness can easily make the other feel secure. Emotionally, the Capricorn might struggle to express how much he might care for his Taurus woman so he tries to show it by providing what she needs.

Capricorn men aren’t verbally affectionate, though he might end up spoiling her which would be something the Taurus woman would eventually understand. She may even teach him how to enjoy his sentimentality and to allow himself to be comfortable from time to time.

She will teach him that it’s okay to work hard and play hard. The biggest obstacle will always be about emotional fulfillment and hopefully, they do not become bored of one another. As two strong earth signs, they might not be the type of couple to experiment with something new.

This is a love that takes patience, some plants are already beautiful even though they haven’t fully matured. When the Taurus woman has endured the ways of her Capricorn man to the point that she is able to see him on a soul level, the Capricorn man will never let her go and nothing else makes him fulfilled the way she does.

Does a Capricorn man and Taurus woman work, is it a good combination?

The Capricorn man and Taurus woman make an excellent combination whether they remain friends or become lovers. They are different but similar enough to have a natural understanding. They motivate each other to do their best and their practical nature gives them the objective to keep on trying as opposed to allowing the drama to cloud their relationship.

Marriage between a Capricorn man and a Taurus woman, final words…

The Capricorn man and Taurus woman in marriage is a great choice especially when it comes to building a future together. These two will be the type to want to settle down one day. The two of them have a strong ambition to succeed.

For the Taurus woman, it is her drive for security, to make sure there are always resources. For the Capricorn man, his primary love language is his sense of duty and making sure he becomes a good provider. This marriage might struggle when it comes to emotional intimacy and then there’s the threat of becoming bored eventually.

As two earth signs, the Taurus woman is not a fan of change and surprises. She is as predictable as she gets. She loves her Capricorn man because he is like her, practical, and easy to read. Their bluntness can do wonders for them since they will be honest but this can also act as a double-edged sword because of the lack of sensitivity when it comes to their nature.

When the two are convinced that they share the same values and goals in life, there’s no reason for them not to have a lasting marriage. The Taurus woman will be fine handling the family home and managing it. She will allow her Capricorn man to take the lead. He, in turn, feels fulfilled as a man and feels like he made it in life, he will not really have a reason to let go of that life. 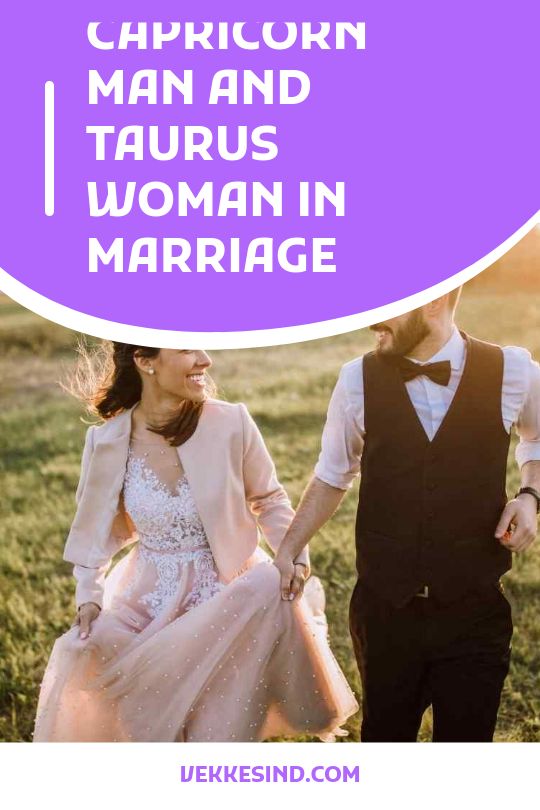