If you are an Aries woman exploring the possibility of marriage to (long-term relationship with) an Aries man, then click over to this article, Aries man and Aries woman in marriage because it’s written specifically for you!

Ok, that said, let’s get going… With Aries both being their sun sign or their identity,  they are spontaneous and stubborn. In love, they can be flirtatious and adventurous. If you’re wondering if their ego is too much for each other, continue to read on.

The Aries woman and Aries man in marriage is excellent. As they share signs, they have a natural understanding of their need for freedom. They support one another on their ambitions. They don’t easily get offended because they share the same temperament. The only issue here will be who submits to who.

If there’s anything you need to know about the Aries woman, is that like you, she is straightforward and honest. Time is a precious resource to both of you and so, both of you appreciate honesty and dislike mind games. You would both be frank about what you want in the relationship and what you expect.

Communication is definitely one of the strengths of an Aries couple. It saves energy from unnecessary drama and even if they get a bit too busy, they understand that it’s something they need to do. Not a lot of signs will be able to keep it easy except their own signs.

If there will be any concerns it has something to do with compromise. As both the Aries man and woman are dominant, someone has to wear the pants. If only they can realize they can take turns leading or be content with both of them working together with a common goal.

The relationship can be long-lasting even without them trying. Arguments may be a form of playful teasing that friends and outsiders might not be able to tell apart. Relationships are nice to have but is not necessary for them to survive. Aries is the first sign of the zodiac wheel and represents independence and taking charge.

If anything, they don’t like to show their weakness even if the Aries sign has a reputation for being the baby of the zodiac. They may put up a tough exterior but they can be very sensitive. Things really do turn out for the better if they happen to share goals. They could easily become a power couple.

For more details about “Dating an Aries woman… and the 12 things you need to know!” click here.

There’s no challenge when it comes to convincing each other to get it on. Aries is a physical sign. There might be a lack of emotions when they make love but they sure do make sure they don’t finish until they’re satisfied.

Maybe it’s best to have a soundproof room and a bed that’s immovable. Tell their neighbors to go somewhere because for sure they’ll do it over and over again. It’s possible they could treat it like a competition, see who gives in first.

For this couple, no need for suggestions or flirting. Just say so, and let it rip. Though since they are more selfish about their pleasure as they do put themselves first, there might be times that one may not feel satisfied.

For 8 Steamy tips to turn on your Aries woman in bed, click here!

As friends, the Aries man and woman have a strong pull towards each other. They have no complaints because they feel like twins. They have a natural understanding of their ambitions and how they want to prove themselves.

The Aries man and woman can be optimistic. Since they are both adventurous, they might enjoy activities like camping or hiking together and just have short out-of-town travels. Though when it comes to bets, don’t expect there will be cooperation.

This pairing has the potential to be long-lasting. Arguments will be a normal part of their routine. The good news is, when Aries gets angry, it’s usually through bursts, and it is finished. They’re not the type to hold grudges.

The two signs like to look forward to the future and to chase the things that they truly want. They can think of one another as mirrors as they tend to trigger each other’s good side or even shadow side. It’s not surprising that they can make a scene on petty things.

As they share signs, there will be a lack of cooperation since they are the polarity of Libra. Folks who see them can describe them as the hot-headed couple. They may view them as a couple that competes with everything and can’t wait. Their relationship feels like soul mates or getting to date your best friend.

Commitment will not be a huge issue to them. They both share a great capacity for loyalty. They can be extremely devoted once they set their minds to it. Their relationship enjoys a familiarity that they can’t find with any other signs.

Does an Aries woman and an Aries man work, is it a good combination?

The Aries man and woman do make a great combination. Marriage may not be the priority. Most likely it has something to do with their career or even travel. They will constantly compete with each other, pushing one another to become their best selves. When aligned, these two can be unstoppable forces.

The marriage between Aries man and woman is great. They enjoy a solid foundation with one another since they can see each other on a soul level. Though they may not get married right away, they feel like partners in crime and the same person in a different body.

The Aries woman may have seen her future with you, she would not be the type to agree on getting married if she knows it’s going to keep her down. As both of them are honest, take it or leave it kind of signs, then they respect one another’s time which saves them from anxiety In the relationship.

They will most likely not rush to get married. They can be loyal and dedicated to one another but It doesn’t mean they will want to settle down immediately and have children.

For the Aries woman, she would take it as a nightmare to be the classic housewife, forced to be at home. She would become too bored and may constantly fight with her husband.

It’s best to allow the Aries wife to have her own career or business to keep her busy. She needs to be where the action is. She will be unhappy when she is stagnant and missing in action. Another thing is that since they are both aggressive and bossy, arguments may be normal.

There has to be a sense of compromise between the two of them. They are already impatient and it will not help if one or both of them is immature. T

hey work best when they put on a mature perspective of life and choose to communicate when they disagree on something. It’s not bad to have a middle ground or to take turns in being the leader. 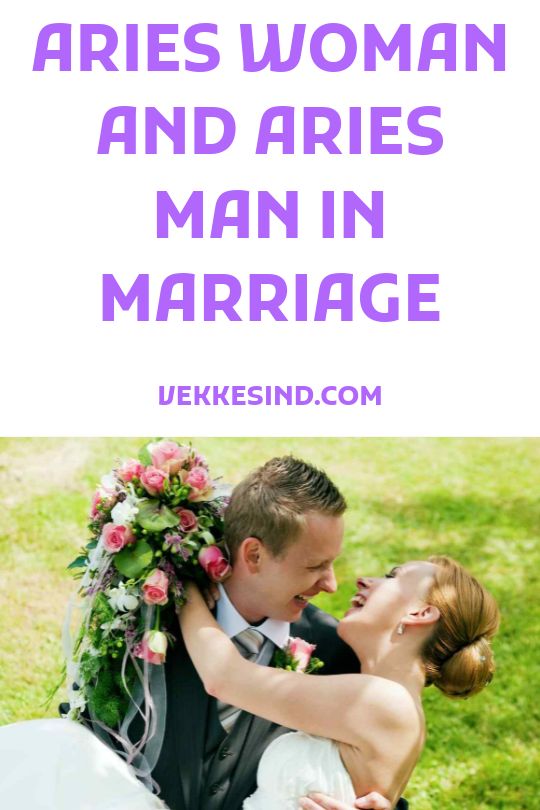