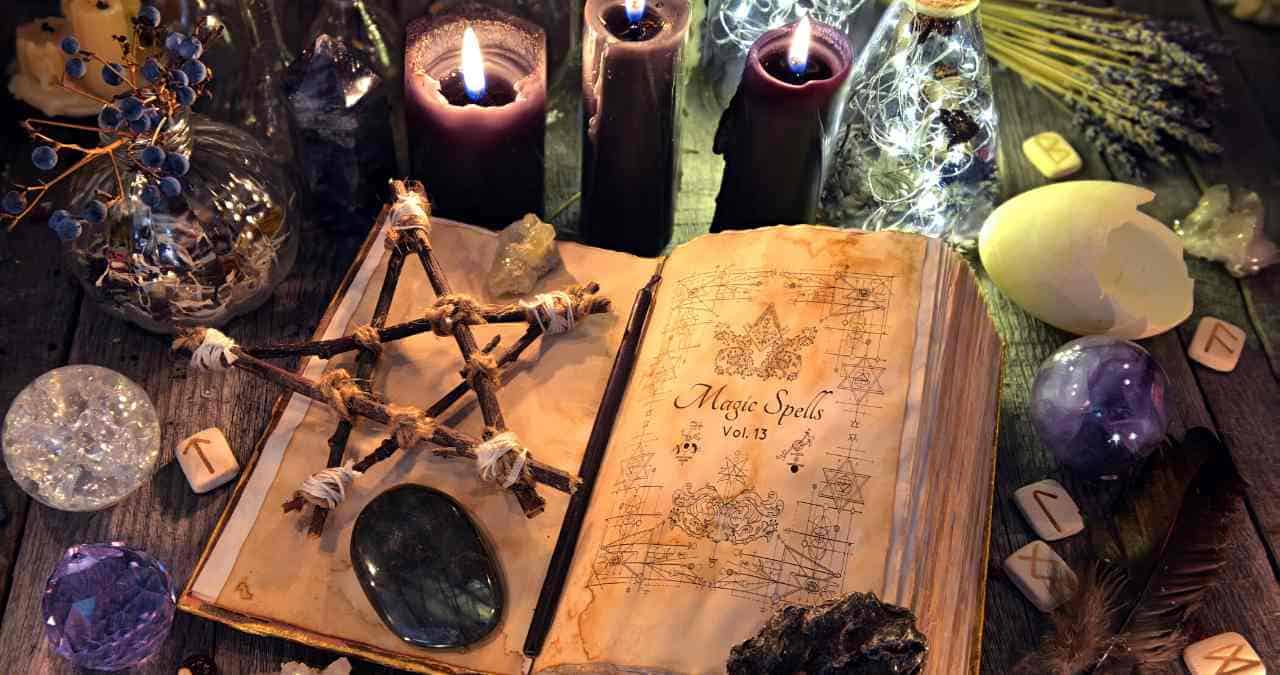 Perhaps you’ve heard a story like this before: a teenager brings home a deck of Tarot cards and leaves them in their bedroom. Soon after, a parent finds the deck and tosses it away while loudly announcing that “there will be no witchcraft under this roof”.

Frustrating stories like this one are all too common. They are especially frustrating because plenty of Tarot readers have nothing to do with witchcraft at all. This may leave us wondering: are Tarot cards witchcraft?

Tarot cards themselves are simply a stack of card-stock with printed images. They originated as a card game and evolved over time to become a tool for people from all sorts of belief systems. They can be used for divination and witchcraft, but they can also be a mundane tool for self reflection.

Yes, some Christians are Catholic, and some people use Tarot for witchcraft, but it would be ignorant and incorrect to assume that either of these things were the case a hundred percent of the time.

Before I delve into this topic, I wanted to point out the Related Articles section at the bottom of this post. I’ve included a list of articles that I thought you would find interesting, please check them out once you have read this topic.

A Brief History of Tarot

It is believed that Tarot had its origins as a parlor game in late 14th and early 15th century Europe, especially Italy and France. The object of the game was to lay down cards in a certain order in order to score points.

The earliest Tarot decks were owned by higher class citizens who could afford to commission an artist to paint each card. After the invention of the printing press though, the cards became more affordable and readily available, so the popularity of the game began to spread throughout more of society.

It was not until the 16th century that Tarot cards began to be used as a tool for divination. Initially the cards were not used in the same way we use them today, but as time wore on the techniques evolved.

In the centuries that followed, Tarot readers began to commonly accept specific meanings for each different card, and over time the practice of Tarot reading evolved into the practice that modern readers today would recognize.

In 1909 a British man by the name of Arthur Waite teamed up with fellow member of the Order of the Golden Dawn, Pamela Colman Smith to create a new Tarot deck. Smith was one of the first to include images of humans on the Minor Arcana cards, which contributed heavily to the wide appeal of the deck.

This new imagery added more depth to the deck than previous designs that just showed clusters of cups or swords on the minor cards. This new approach was popular with Tarot readers because the imagery resonated with them which made it was easier to learn and retain the meanings behind each of the cards.

In 1910 the new deck was printed by the Rider Company, and the Rider Waite Smith (RWS) deck that readers around the world know so well today hit the market.

Since then, the RWS deck has become one of the most well-known decks in the world and serves as an inspiration and starting point for many new decks.

Today, there are hundreds if not thousands of decks out there with every sort of theme from cats, to Game of Thrones. No matter your interests and tastes, you can most likely find a Tarot deck to suit your preferences.

Many of these decks take their inspiration and formatting from the classic Rider Waite-Smith deck. Check out some decks in this list from Amazon:

Since the beginnings of Tarot as a 14th and 15th century card game, people from all sorts of belief systems have gained an interest in Tarot reading. Some readers use the cards for divination while others use them as a means of connecting with Gods or spirits, or simply as a tool for gaining insight on a situation or a decision that needs to be made.

These readers may be secular, or a part of a major world religion that would often frown upon the practice of witchcraft.

While some Christians do choose to distrust and avoid Tarot, there are plenty of Christians find no conflict between their cards and their faith. Some Christians may use their cards as a means of connecting with God, or with loved ones who have passed on to Heaven.

Many connections can be drawn between the imagery shown on the classic RWS deck and the Christian faith, and there are even decks out there that are designed for Christians and feature Christian imagery such as angels.

Tarot reading as a form of divination does not fit together well with the Jewish Faith since the Torah forbids divination and consultation with the future. That being said, Tarot cards are not always used to look at the future. Tarot cards can also be used to connect with spirits or deities.

This seems to be more acceptable within the faith. A quick Google search certainly confirms that there are indeed Jewish Tarot readers out there who use their cards for purposes other than divination, and have no trouble reconciling this practice with their faith.

There are plenty of atheist, agnostic, or otherwise secular Tarot readers out there who read cards but do not practice witchcraft.

These readers generally don’t use Tarot as a means of connecting with a deity but may use their cards as a tool for divination, a line of communication with spirits, or simply as a means of looking inside themselves for insight on a situation.

The insight offered by Tarot cards can be beneficial to readers of any belief system.

I also have an article that talks about tarot and religion, read that here… “Are tarot cards religious?“

Note: For simplicity’s sake, the word “witch” is being used here as a gender neutral term for somebody who practices witchcraft. It is perfectly possible that a practitioner of witchcraft might prefer to use a word other than “witch” to describe themselves.

Many witches use their cards in the same ways that readers from other belief systems might: as a means of glimpsing into the future, as a way of communicating with a deity or spirit, or to look inside of themselves for guidance and new perspectives. Tarot in witchcraft can go beyond these uses though.

Since each card has a specific meaning, a witch may choose to make use of a card when performing a spell. Placing a card on your altar can help channel the energy of the card and bring more power and intention to your ritual.

The Empress could be included in a spell regarding pregnancy, The Hanged Man could be a helpful addition to a spell for letting go of addiction, or The Lovers could be incorporated into a spell to strengthen a relationship.

A Tarot reading can also help a witch determine what spell or ritual they should perform, and why.

The Cards as a Tool

Even if Tarot cards are being used as part of a witch’s ritual, or helping a witch decide what course of action to take, this still doesn’t make the cards themselves witchcraft.

Whether they are being used by a witch for a spell, by a Christian to communicate with God, or an atheist attempting to decide what decision they need to make, the cards will always be a stack of card stock with imagery printed on them.

Tarot cards are simply a tool for the reader to make use of. It is what the witch or any other Tarot reader chooses to do with them that makes the cards what they are.