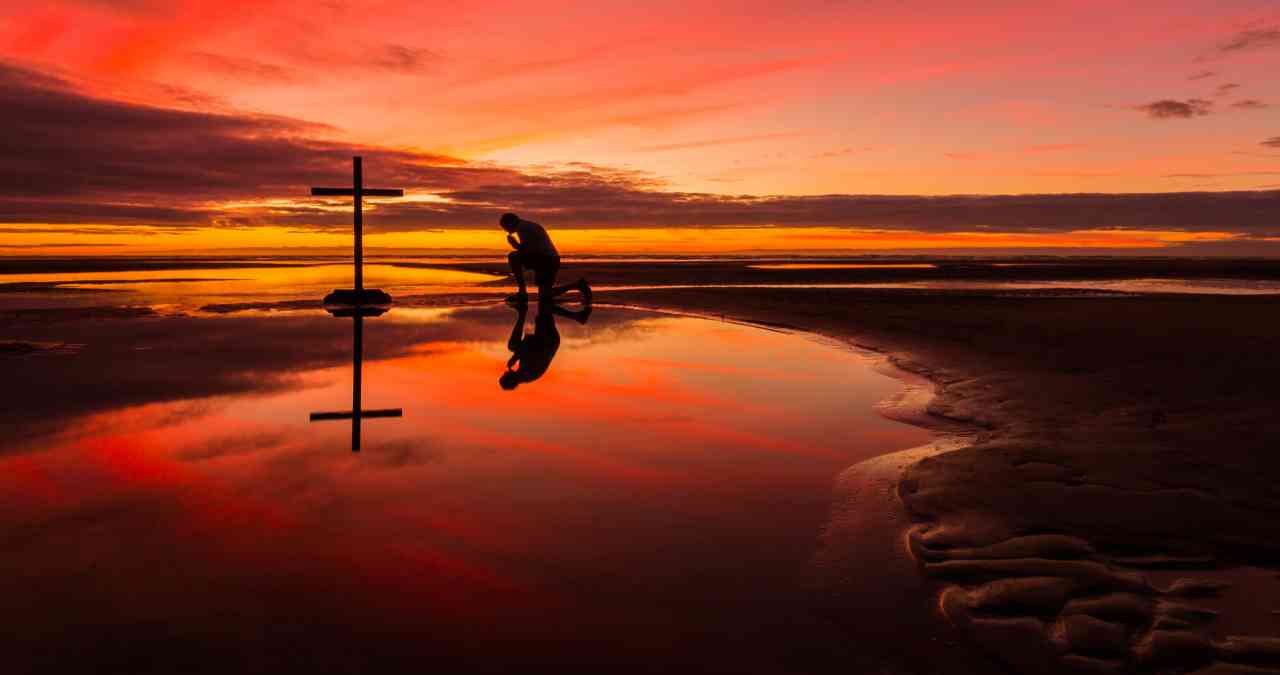 Religion and Tarot are interconnected in many diverse ways. Cards like the High Priestess, the Hierophant, and Judgment depict a certain feeling of reverence and devotion to the sacred.

We should remember that these cards were crafted during a time when the belief in the existence of God was almost unquestionable, and therefore could not be missing out on such an important cultural influence. But are they truly religious?

While Tarot cards were probably created by religious people and can be implemented in any kind of spiritual practice, they are not an independent religion and do not require from the individual to have faith in the divine nor to comply with a specific belief system.

While spirituality and religion often co-exist, they are entirely different concepts. Many people who have an interest in the Tarot do not belong in any particular religion whereas many believers and even skeptics would quickly dismiss it as witchcraft (read this article for more details), scam, or worse!

The origins of these cards are shrouded by mystery, but they are closely tied to the most influential religions of the past.

We will explore these origins, along with other interesting facts, after we establish the reasons why this technique of divination and self-reflection is something entirely different from religion.

You will find more information and related article at the bottom of this post.

Why is the Tarot NOT religious?

The Tarot can be regarded as a mirror of the soul, a tool for divination and spiritual development or to heal psychological trauma.

Religion, on the other hand, is a set system of practices and beliefs, often designed to appeal to the masses, characterized by the worship of God or the supernatural.

The Tarot includes God, for obvious reasons. Being a unique form of a pictorial language that tries to unite the many different facets of life, it addresses everything one might wonder about, from commonplace affairs of employment and love to ecstatic revelations and hidden wisdom.

Thus, Tarot encompasses religion, without being entirely defined by it.

What exactly is religion?

Religion can be defined as a system of thought based on the belief that a superhuman entity or power exists. Religious groups express their faith and devotion with symbolic acts called rituals or mysteries in the Christian tradition.

Often there are certain rules, do’s and don’t(s), moral principles that the faithful should abide by to communicate with the deity or the ancestral spirits, who will bless them with a meaningful life and the strength to overcome difficulties.

The problem with religion in modern society is that it is rapidly becoming obsolete, descending to mere superstition and bigotry.

Scientific thought, psychology, and the failure of the clergy to keep up with the modern way of life are some of the reasons why God has been reduced to an institutionalized remnant of the past, while the interest in alternative spirituality is on the rise.

A lot of people cannot relate to organized religion anymore. As they are searching for their truth, they turn to traditions like the Tarot, that were once forbidden and considered taboo.

The open-mindedness required to be involved in divination is rare among the faithful. Christian faith labels divination as witchcraft or heresy, but it was common practice in Eastern traditions like the I Ching and Buddhism, the so-called “religion of no religion”, in the Oracles of ancient Greece and Pagan tribes around the world.

From Christianity and Judaism to Wicca and Atheism, Tarot cards are a useful tool for the enlightened disciple. This is reflected in the numerous different types of Tarot decks designed over the years.

If we take a closer look at their origins, we will find that these cards were designed to unite religions on common ground, consequently transforming them into something entirely different, or that perhaps, after hundreds of years of cultural exchanges, a new idea was needed, one that stemmed from all religions but transcended them in a creative, human way.

Writer, director, and tarologist Alejandro Jodorowsky writes in his book The Way of Tarot: the Spiritual Teacher in the Cards, that the Tarot was created as a unifying concept for the three major religions of the Middle Ages: Christianity, Judaism, and Islam.

Jodorowsky also points out that the regular playing cards that appeared later without the Major Arcana, made a “godless game” out of this sophisticated tool for self-reflection. (For more details about the cards of the Major Arcana, read this article.)

There are many opinions on the subject, some stretching out to ancient Egypt, China, and Spanish gypsies. In another book it is mentioned that priests of the Byzantine Empire secretly used such means of divination and that the word Tarot is derived from the Greek phrase “I ask them” (ta roto).

There’s another reference claiming that a group of Islamic soldiers brought a game of cards called Mamluk to Europe from their homeland that would later become the Tarot cards as we know them today.

Historic records vary on the origins of the mysterious cards, but one thing is certain. The ties of the Tarot to the divine are many.

The Pope, the Devil, and the Occult

Tarot cards are packed with religious symbolism. The cloistered High Priestess and her sacred book. The Hierophant is a priest, teaching and blessing his two disciples in a temple with the sign of the cross. In Judgment the skies split open to reveal an angel of the Lord while the dead rise from the grave to ascend in the Heavens.

The Hermit holds the radiant Star of David to light his path. The four creatures of the World can be paralleled to the four apostles, John, Peter, Mark, and Paul.

And there is the wrath of God in the Tower, which in some decks is named “The House of God” or “The House/God”. There is an overwhelming abundance of religious references in the Tarot.

Some other cards reveal a connection to the occult principles. The mysterious Moon was revered by ancient tribes. The Magician who conjures the elements. The fearsome Devil dwells in the darkness of the abyss.

Let’s not forget the enigmatic Sphinx, originating from Egypt. The Karmic implications of the Wheel of Fortune, and the connection of the 22 Major Arcana to the 22 paths on the tree of life in the Kabbalah and the 22 letters of the Hebrew Alphabet…

So how exactly can we say that the Tarot is not religious when all this evidence suggests an unquestionable relationship with the divine?

A blend of these obscure symbols and different traditions would certainly be blasphemous in the eyes of the pious and the holy, especially in the era when this peculiar game was invented.

The Bible condemns any kind of divination, witchcraft, or sorcery and has burned many a witch at the stake for committing such acts. This is why the Tarot is different and universal; it doesn’t judge. It has no rules, no gods, and no masters.

It serves those brave enough to seek the truth; or better yet, to create their truth out of the infinite possibilities…

They can be included in religious practices, though they are not limited to them and can be utilized for divination, simple games, therapeutic rituals, witchcraft, sorcery, and spiritual guidance…

In a world where organized religion has shown its true face, that of fear and oppression, the Tarot is a flame in the dark, uniting human beings and allowing them to rediscover the path to wisdom.