The Aquarius woman is someone who will never run out of surprises. She is unpredictable and has an eccentric genius that may sometimes be misunderstood. She is detached and doesn’t see the buzz on why people go crazy in love. She is an idealist but also a rebel.

The Aquarius woman in marriage is like marrying a best friend. She has her own world and other things to get busy about. She will not give you a conventional marriage and she will certainly not be the type to be the housewife and manage the kids. Instead, she prioritizes her career, preferring to advance her ambitions.

The Aquarius woman in courtship

The Aquarius woman has a lot of things going on for her. She is reputed to have an allergy to commitment. She is not the one to tie the knot. She loves her freedom and wants to use it for the betterment of society. She is definitely not a romantic partner.

Society may view her as difficult and she may sometimes deal with being treated like an outcast, but most of the time they are the reformers. She is the one to set the trends and eventually the very people who mock her start to praise what she did in the beginning.

Bear in mind, the Aquarius woman is fiercely independent. In fact, she may not be the best person to open up to. She finds vulnerability awkward. She may understand you but since she is logical, she is not able to react how you would like her to be.

She also gets easily bored, to be honest, the Aquarius woman might not mind polygamous relationships. It’s better to be clear with your boundaries and set intentions to avoid unnecessary heartache. She will also be unconventional in the bedroom and you’re going to be introduced to a lot of taboo.

The Aquarius woman will never want to be controlled or asked to be changed. It will drive her to insanity. She is looking for someone with a similar lifestyle and mindset. Someone who can understand and be supportive of what she’s all about. In love, her love language may have something to do with service, quality time, and gifts.

OK, let’s look at marriage with a Aquarius woman…

Marriage with an Aquarius woman

The Aquarius wife is a social activist and humanitarian

If you made it here, you should have already accepted that a marriage with the Aquarius wife doesn’t work like how tradition or Hollywood would expect you to have. Most of the time, she would prefer not to have children, even if she expresses the desire to have them, it may not mean she will have time for them.

As your wife, she will keep things interesting. She will teach you about the greater purpose when it comes to society. She wants to be a contributor, the innovator, or a reformer of the system. She is progressive. She is called a rebel because she refuses to keep doing things that she already knows are not working.

She is a future thinker. In her past relationships, she would have moved on easily. She doesn’t allow the past to cloud what’s yet to come. When you marry an Aquarius woman, you also marry a visionary, and you never know where her ideas will take you.

The Aquarius wife wants to feel safe to be herself

Many Aquarius personalities have felt like an outcast or feel like they do not belong where they live. If she were to risk her freedom for the sake of marriage, then the Aquarius wife is longing to have a safe place and person where she knows she will be supported no matter what.

The Aquarius wife is all about purpose. Sometimes they get a bad wrap for being attention seekers but it’s actually part of their personality. It’s not that they’re pretending, it’s natural for them to be unconventional.

She is longing for someone she can trust and who is able to trust her. Because there’s a tendency that she will not really be able to spend most of her time with her partner, there might be doubts and ways for the other to be tempted. It might make someone anxious, and wonder if you would lose her.

Hopefully, her partner would not resent her coldness, since she is not emotionally expressive, the partner might feel neglected but it’s not her intention for you to feel like that. She is just built differently.

The Aquarius wife is an original

If she is a product, she is definitely custom-made. Someone who is unique and hard to find. The Aquarius wife is able to express herself authentically and may have an attitude that doesn’t care about what others think. She might attract haters and bashers but to her, she’s probably doing something right.

Many times, she excels in the things she is passionate about. She may even bring a fresh perspective or a new angle on how things are supposed to be done.

The Aquarius wife is fiercely independent

Ironically, despite her deep concern for humanity and the community, she is not really the most emotionally relatable person to exist because of her tendency to use logic. Basically, she is a wife that can’t be tamed and she will always do what she feels like just because she wants to.

If you want a submissive wife, skip the Aquarius wife. She has an innate strength and will not allow any man to dominate her. She will never allow herself to be a victim of a man’s jealousy and possessiveness thus she also protects herself from a man that may abuse her.

She thinks fast and is very determined. As a fixed sign, no one is going to be able to stop her when she wants something. If she is paired with a Libra, who usually struggles with decisions, then the Aquarius woman will be able to lift that burden from him.

The Aquarius wife has strong willpower

There would be a lot of trouble if you don’t let your Aquarius wife pursue her dreams or her career. She would seem cold and insensitive but she would rather isolate herself and think her plans through rather than show weakness in public.

She would never agree on marrying you if she knows you’ll constrain her. She will fall in love, even more, when you let her be herself. The popular quote, “if you love someone, set them free, if they come back they’re yours, if they don’t they never were” would apply to anyone who has a relationship with her.

The Aquarius wife will be your best friend for life

The Aquarius wife remains everyone’s friend even if she gets married. If there is one thing, she spends her energy on, that would be her community. If you are married to one, you have to be able to bond with her friends because they are her treasure.

Even her exes still remain her friends. Though it is almost impossible for them to get back together there’s nothing to worry about that. When it comes to moving on, the Aquarius people are the experts. It may seem like she is not marriage material, but she’s just not traditional. If there are good traits about the Aquarius wife, it is that she is loyal and has a great capacity for sacrifice.

She is also accepting, meaning she doesn’t judge others for their choices. She is able to see their point of view. If you give her freedom, then she also provides you space.

The Aquarius wife has an excess of passion

Time would be a big issue with your marriage to the Aquarius wife. She would always be distracted in her causes and activities that she might not really realize her inner work or why she’s doing those things in the first place. She would need space from her husband to compose herself.

In other news, she is also quite an experimental vixen, she would be open to fulfilling what many men fantasize about in the videos they watch. She can be the teacher, the nurse, and whatever she feels like. She’ll be so into it that she would be willing to rent a place that looks like what you dreamed of.

Despite being addicted to her freedom and rebellious ways; she is capable of commitment. Romance is just not her strongest suit.

Marriage to an Aquarius woman, in a nutshell…

The Aquarius woman in marriage is not for the faint of heart. She is unconventional, she will not be your submissive wife, and she will definitely run away if she was forced to remain at home. Being controlled makes her miserable. She is a wife that can never be tamed.

The Aquarius wife will also have a life outside of the marriage. She will keep busy with her career or causes. She is a humanitarian and a lifelong friend. Even if you are married, expect that she will keep in touch with her community. This proves her loyalty and dedication to the people she loves.

As a lover, she would probably make you the happiest man alive. She is freaky and adventurous and will not mind risking it in public places and may even agree on having multiple partners with you. The marriage with her is not for the jealous and possessive. You would have to have an open mind to make the marriage work.

Emotionally, she might be the most awkward person to ask for comfort. She is not really able to express them freely. She is logical, she tends to rationalize what she feels so she never truly lets herself feel things. If you are able to love her as she is and not mind if she will not change, then she will keep coming back for you. 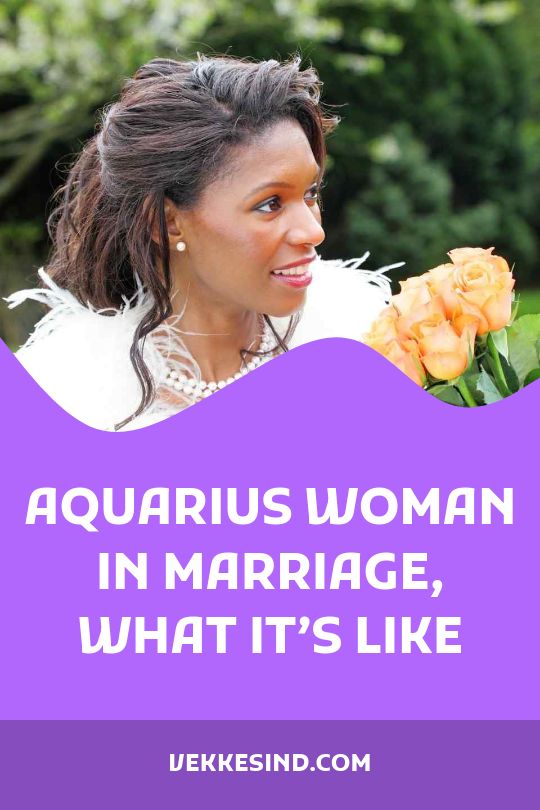