If you are an Aquarius man reading this and are looking for insights into marriage to (or a long-term relationship with) a Taurus woman, then click over to the article, “Taurus woman and Aquarius man in marriage”. It’s specifically written for you!

So, let’s begin… The Aquarius man is ruled by the planet of Uranus, which was called the Awakener. Aquarius is the water bearer and the rebel. He sees the world in a humanitarian view and wants to be a contributor to a change that will revolutionize the world. Romance is not necessarily a priority to him and the way he expresses love may not always be obvious.

The Aquarius man and Taurus woman in marriage will be unconventional. This is when opposites come together with differences that may make or break the relationship. There will be a lot of adjustments if they want to make it work which will not be easy.

The great thing about an Aquarius man and a Taurus woman is that the two are both independent and strong. They don’t have to be codependent and there’s the mutual respect in each other’s abilities and qualities.

Though the dating life of an Aquarius man and Taurus woman will not be shorter than problematic. The Taurus woman is driven by security. To settle down eventually, to reach stability. She is comfortable when she finds things that are easy to read or predictable.

Guess what, if she will be dating an Aquarius man, it will be the opposite of what she’s yearning for. He is an unconventional character. He loves his freedom more than anything else and she has to be nothing short of a miracle to convince him to commit in the long run.

Maybe it will eventually lead to something more if time wasn’t an issue. It’s possible for them to eventually take it to the next level if they have known each other for years. This way, the Taurus woman would have adjusted to him and there will be a sense of familiarity.

Maturity may sometimes encourage the Aquarius man to settle and think of the long term but even then, he may have behaviors that may leave the Taurus woman emotionally unfulfilled. If somehow, they have a mutual understanding that they are simply two different people, then it will be easier to bear.

For more details about “Dating an Aquarius man… and the 12 things you need to know!” click here.

For sure, the Aquarius man and Taurus woman will have lots of it. That is despite their differences in the way they make love and even with their fantasies. The Aquarius man might suggest doing it in random places like the forest or if they dare, a public place. He is rebellious and shows it through sex.

The Taurus woman may not agree on upfront with what the Aquarius man wants. She likes to be seduced, romanced, and wants what’s familiar to her. If only the two are able to communicate their needs to one another to meet halfway then it would be more emotionally fulfilling otherwise, at least they get it whenever they want it.

For 6 Steamy tips to turn on your Aquarius man in bed, click here!

As friends, the Aquarius man shows the Taurus woman that it is not bad to put her shoes on when it comes to a group. He teaches her that it’s alright to take in a burden that doesn’t have to do with her. There are always two sides to an Aquarius man, which is, he is detached, he is individualistic, and he wants to be original.

The other side of him may refer to his image as the water bearer where he carries the weight of the world and directs that into a single flow. He likes to form communities and groups. He is open to exploring other people’s cultures. In a way he is a paradox, he is detached when he is focused, and he is involved when his inspired.

The Taurus woman will admire these traits in him. She may influence him to be a better person by not telling him things like it’s not alright to suddenly disappear on someone just because he feels like it. She teaches him to be down to earth and to be humble.

There might be a clash when it comes to their friendship. They aren’t the best of friends nor are they the worse of enemies. They are able to sit beside each other and not fight but it’s hard for them to feel a natural connection even if it’s intellectually.

When it comes to a long-term commitment or relationship, the Aquarius man and Taurus woman may not be one of the best couples. There are a few things that can make it last but it doesn’t guarantee a lifetime. Things like having a common ground and being able to understand each other’s motivations are important.

As the two of them are fixed signs, they can be stubborn to a fault. The Aquarius man struggles from being called a know-it-all and the Taurus woman is just like a fixed tree, almost impossible to change especially if she is proving her point.

Another factor is the differences of their elements like air is all about movement, it is restless. It wants to be where not a lot of travel. Then she is of earth, where she wants to be grounded, she wants to grow seeds and harvest fruit.

If they do manage to get along, they might turn out to be a clumsy couple. An aloof one, they will definitely live life in two ways. The Taurus woman takes life slow and the Aquarius man does what he wants whenever he wants. Though, the advantage here, is that the Taurus woman is more likely to get things done as opposed to the ever-changing mood of the Aquarius man.

They need to find a common purpose and be able to accept their differences. Some things aren’t worth fighting about if it means losing the person you love. They have to think if there are things worth sacrificing in order to be with them. Another thing is being aligned with what they want in life, to give them increased chances of making it work.

Does an Aquarius man and Taurus woman work, is it a good combination?

The Aquarius man and Taurus is not the most common choice and is neither a good nor bad combination. They just do not stand out. They are better off as friends or supportive individuals. Their nature and their motivation in life can prove to be too different, therefore extremely challenging to remain in an intimate relationship.

Marriage between an Aquarius man and a Taurus woman, final words…

The Aquarius man and Taurus woman in marriage is not something you see every day. As partners, you can count on them to get tasks done. Individually, they are strong and display leadership qualities but working together may be a bit too challenging for both of them.

You see, the Aquarius man is too much of a freedom lover, amongst all the signs in the zodiac wheel, he is one of the last to agree to a committed relationship. There is something about commitments that threaten his freedom. Besides, he has this point of view that romance isn’t all there is in life.

The Taurus woman will struggle with this because she is happy when there is stability. She is a homebody; she likes what’s comfortable and what’s familiar. This is unlike the Aquarius man that is stimulated by the odd and mysterious.

She hopes for having a long-term commitment or marriage while the Aquarius man doesn’t exactly prioritize this. His love language may also prove frustrating to the Taurus woman. As a detached sign, he may not be able to express it in words but he is capable of loyalty if she is able to realize this.

Even when it comes to intellectual compatibility, they may struggle to find a middle ground. Overall, the marriage between the Aquarius man and Taurus woman is not one of the best choices to make, they would do better to remain as friends who agree to disagree. 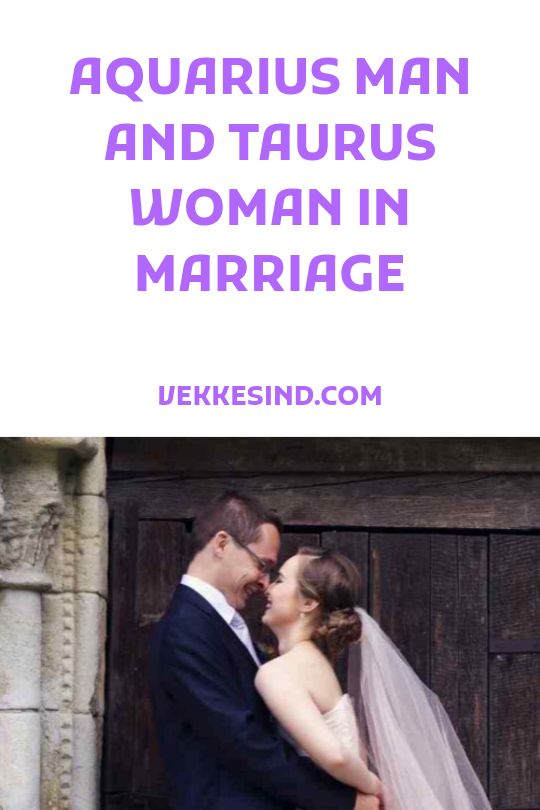