The Aquarius man is the eccentric and rebellious leader and the Aries woman is the headstrong and aggressive leader. As two stubborn and opinionated signs, read on if they will last in a marriage.

The Aquarius man and Aries woman in marriage are like a taste of their own medicine. These two signs are considered the most independent signs of the zodiac wheel. Whether their relationship works or not, they’re both future-oriented and can eventually move on. It may be best to remain friends.

For more details about your Aquarius man, also check out “Aquarius Man Secrets“.

Thinking of an Aquarius man committing to someone feels like a miracle by its own merit. He is not someone to risk his freedom so lightly. For him to like someone to the point of getting tied up means he sees purpose in being in your life.

He may not be the conventional lover; he may prioritize his work or causes above the relationship. He is simply someone that sees a life beyond romantic love stories. He wants to be recognized and make changes to the world or even just within his community.

The good thing about the Aquarius man and Aries woman getting together is that both of them have something exciting to look forward to. The Aquarius man’s constant disappearance or unavailability makes the Aries woman seek him more.

Communication will be one of the highlights of their relationship. They will always talk about extraordinary and maybe provocative or scandalous topics. There is no judgment when it comes to their curiosity. There are a lot of things that they can learn about when they’re together but they can also have a clash with their egos.

A note for the Aries woman, the Aquarius man is not the traditional boyfriend. He has his own ways of trying to show you he loves you. He may feel awkward in expressing his emotions too. Though the keyword to their sign is the purpose, so as long as he knows his purpose with you, you can always rely on him when you need him most.

For more details about “Dating an Aquarius man… and the 12 things you need to know!” click here.

Even if they become toxic, this is a couple that will never have a reason not to get it on. These two are wild. They are primal lovers and they can add fuel to what’s already burning. It feels like if they booked a room to do it, they’ll make sure to make the most of their money.

The sex itself will not be emotional, at least not all the time. The Aries woman is physically focused, very carnal, and can’t wait to have it. The Aquarius man wants to try all of these new things whether it’s a new venue or a new position. He may even buy costumes for his Aries woman. So of course, they have their fun.

For 6 Steamy tips to turn on your Aquarius man in bed, click here!

When it comes to being friends, they do have a lot of potentials to have a long-lasting one. Whether they’re regular friends or being friends with benefits, they have an instant understanding of what they both want.

As friends, they will constantly have a lot of debates and exchanging of ideas. The bad news is, as mentioned, because of their egos, they might need to watch out for that since this will always be the reason that they will argue.

The Aquarius man and Aries woman have no issues when it comes to trust. They both place importance on being able to be free in making their decisions. If they truly love one another, there is honesty with one another.

The Aries woman will be the one who will be jealous between the two and she will also be in hot water from the Aquarius man because of her natural tendency to flirt. If she’s able to control her demanding attitude and not suffocate the Aquarius man with her requests, then everything should be fine.

If there is a turn-off for the Aquarius man, it’s people who are needy of him. Cooperation and clear boundaries should be established before they proceed in love. As a couple, they hunt for the thrill. It is a couple when their goals are aligned, can truly turn any vision into reality.

Both signs can be awkward when it comes to their feelings. The Aries woman expresses her love through experiences and the Aquarius man would rather show it through action than to just simply say he loves her. It’s like they want to be seen as the cool kid of the relationship. There might be confusion or questions about If the other person really cares for me may bother them.

Does an Aquarius man and Aries woman work, is it a good combination?

The Aquarius man and Aries woman can be an interesting combination and can work. If the two signs can remain independent of one another and have a clear understanding of their intentions with one another, even though it can be a relationship that struggles with emotional depth, it does have the capacity to last.

Marriage between Aquarius man and Aries woman, In summary…

The Aquarius man and Aries woman in marriage can work but they may be better off as friends. Romantically, they cannot express their true feelings well. They may find it awkward even if it means they have known each other for a while.

There needs to be an assurance on both sides consistently and over time. The Aquarius man needs to remain faithful and both need to be fair in their demands. The Aries woman cannot expect her Aquarius man to be like in a love movie (love story). He is like the eccentric genius, always missing in action because he feels like a greater purpose is calling him.

If anything, their partnership has a penchant for making visions into reality. Their potential downfall has something to do with the detachment and lack of emotion of both signs. If they treat their marriage as something like a plant that they continue to nurture every day, then it will definitely grow into something beautiful and maybe something that most of us would be envious of.

Besides, they’re not the type to look forward to making children or starting a family. In the zodiac wheel, they might as well take the crowns for the most independent signs, even if somehow, they separated, they both can move on and look towards the future. 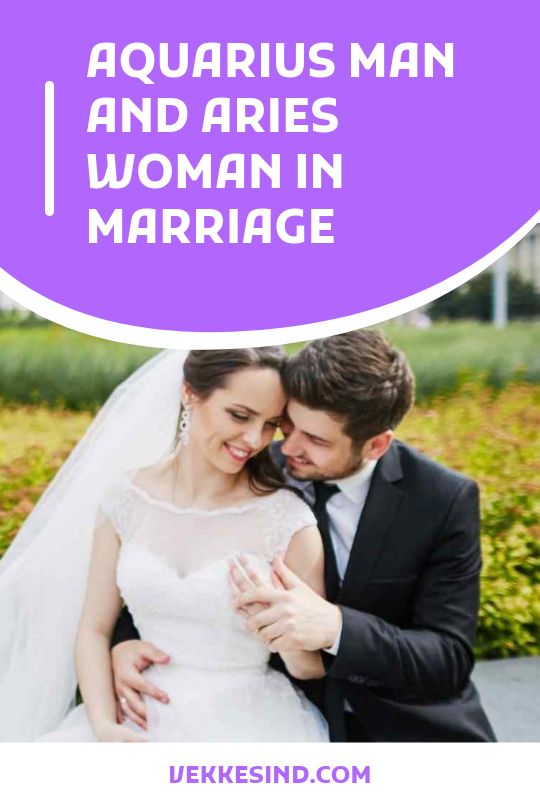