What is the Ace of Swords’ meaning in terms of intentions? What kind of advice would this card recommend? In the following article, we find answers to these questions and also explore the Ace’s connotations of the Swords’ specialty: conflict and arguments.

Regarding intentions, the Ace of Swords possibly means that the individual is looking ahead for novel ideas, a new perspective; they wish for clarity, objectivity, success and progress. As for what they want from you, they’d like to establish some form of communication but, above all, they desire to be understood.

When we deal with the upright Ace of Swords, things are quite straightforward and clear: the card aims for transparency, honesty and certainty, new ideas and theories about life, as well as candid constructive conversations. Perhaps someone is planning a new project and would like some feedback so they can optimize their course of action.

The Swords primarily wish to improve and advance, to be understood and appreciated through interaction, exposition and practice. There is so much to talk and think about, and one needs a fencing partner in order to hone their skills! After all, a sword left to rust in its sheath will lose some of its edge eventually—the mind yearns for excitement.

In case romance is at play, you can be sure the person is interested and wants to communicate with you if they haven’t done so already.

The Ace of Swords Reversed Meaning as Intentions / What Someone Wants

When reversed, the Ace of Swords points to ill intentions. The person in question might be the type who revels in others’ failure and likes to express outrageous statements that dominate the conversation. They have a bone to pick with you, likely just for the sake of arguing.

Bearing in mind that a sword’s purpose is combat, its reversal could only mean spite, an urge to do harm from a distance or, at the very least, to annoy and confuse. In the Swords’ shadow, we find narcissism, discord, mischief, and impulses mistaken for desires.

The individual (whom another card next to this one might often represent) loves the sound of their own voice and will be heard no matter what. They don’t want to engage in conversation; an exaggerated callous monologue is more their style, like all bullies’.

You might be alarmed by the reversed Ace of Swords’ presence, though there is no need to worry, for the Ace signifies something that is only beginning. Like most negative and aggressive attitudes, this inexcusable need to get on your nerves and prove you wrong will go away if you simply deny it your attention and put the instigator back in their place.

What does the Ace of Swords Tarot Card mean in Conflict?

The Ace of Swords denotes a definitive victory in a conflict situation. You are in the right and everybody involved knows that. However, that does not mean the end of the “war.” This might be the first in a series of arguments and, regardless of whether these are real or internal, you might have to plan your strategy.

In the conflict position, this card refers to a rather civilized fight of a mental or verbal nature that you can win single-handedly—a battle of wits. Just apply your logic, be quick to respond, and state the obvious. There is no need for subtlety or diplomacy here, some things are self-evident once we find the courage to point them out.

This dispute might have come up for several reasons. But the Swords, for the sake of efficiency, do not concern themselves with the perplexity of human behavior and its underlying causes—that is where the confusion lies and, consequently, the Swords’ downfall. Break the problem down, reveal the truth behind the tension, and no one will be able to stop you from seeing right through. Strike while the iron is hot!

Now let us compare a heated argument to fencing, a real-life duel. If you stop to think after the fight has commenced, you have already given up your advantage to the enemy. No, you mustn’t think too much—your strategy and response must be figured out within the timespan of seven breaths with eyes closed if need be. Should you get distracted and tarry longer than that, defeat awaits because the opponent won’t give you a second chance. Would you? It’s as simple as this: speak now or stay out of it!

When they hesitate, that is your opportunity. A clever swordsman charges when victory is a certainty and the opponent’s weak spots are exposed. When they look for an opening and finally attack, you hold your defense, dodge, and parry, and then retaliate with the momentum gained—wait for the rival’s mistake and use their own strength against them.

That is, by all means, metaphorical and refers strictly to rhetorical arguments and discourse (or games, sports, martial arts, and rap music if that’s your thing!). We shouldn’t romanticize fighting, even in theory. However, one should at least know how to defend themselves.

What does the Ace of Swords Reversed mean in Conflict?

A reversed Ace of Swords means that you have misunderstood the nature of a conflict and you are currently at a disadvantage. It denotes defeat, hidden truths, clouded thinking, and violent emotional outbursts. Gather yourself, don’t fall for the secondary, and learn to pick your fights with great care.

This is a quarrel that has caused enough damage already; there is mental strain here, as well as anger, artifice, and erroneous arguments blown out of proportion. Your perception of the issue is cloudy at best. Reconciliation and “victory” are but distant possibilities.

There is not much to do save, perhaps, to try and listen to the voice of reason and say no more. Withdraw, recognize your mistakes, and think twice!

The Ace of Swords Tarot Card as Action

The Ace of Swords signifies a “eureka” or “light-bulb” moment when a mental breakthrough is achieved and we come up with a new idea or discover a truth. As an action card, it calls on you to communicate and act on your ideas, and seek ways to bring them forth to reality in the simplest, most direct way possible.

In terms of action, the card encourages you to talk about what’s going on inside your mind without fear of judgment. You are either on the verge of a breakthrough or just about to conquer something you desire. To hesitate now would be sheer folly—go forth!

If you are currently faced with a problem, the Ace of Swords is all about finding the simplest and most logical solution. The answer might be right in front of you. As for social situations, focus on what is true and just.

The Ace of Swords Reversed as Action

In reverse, the Ace of Swords recommends laying your weapons down. Whatever the cause of your concern might be, you are having confused thoughts about it. There might be nothing at all to do other than to step back and try to think clearly.

Even more valuable than knowing how to use the sword is, perhaps, the knowledge of when not to use it. The double-edged blade is an unstable, deceptive power. If you sense that something’s off about the situation at hand, if you do not have a complete understanding of all the problem’s angles, then trust in your intuition and wait for a better moment to act.

As an action card, the reversed Ace is a warning not to act right now. To do so would only complicate matters. There might be unrecognized or volatile emotions behind the scenes, fleeting yet misdirecting, and the ideal conditions to make decisions have not been met yet.

The Ace of Swords Tarot Card as Advice

In a nutshell, the Ace of Swords is about letting your mind guide you and not your feelings.

The Ace of Swords as an advice card tells you to think for a moment with a clear mind and then go for it! Don’t let doubt or emotions get in the way. Focus on simplicity, communication, open-mindedness, coherence, reason, and the truth.

Aces are seeds, laying at the roots of their respective elements and signifying potential rather than results. For the Swords, that means you should focus on the intellect and patiently cultivate the mind through study, meditation and brainstorming, or hone your communication skills, cognitive abilities, and critical thinking.

Be receptive to new ideas. You never know how they will play out and what you can learn. Something that seemed funny or foreign yesterday might prove quite helpful tomorrow.

Talk about what troubles you—as soon as the words are in the air, a weight has been lifted. And if you have already theoretically figured out the solution to a problem, however dire, then it’s as good as gone!

You might think the card’s advice would be to stop and, well, think about it, but that is not entirely the case. The sword is meant to cut through complex thoughts, not complicate them further. Simplicity and force of will over deliberation—a mind intensely concentrating on a single point of focus without any kind of distraction or interference, being guided by pure thought and not the other way around.

In the event you are pondering over an important decision, be resolute and firm about it, for the wind might change in the blink of an eye. The mind’s resilience against change and new concepts can be intimidating, but the pierced crown precisely symbolizes that one swift strike of logic that alters our perception and opens the way to the truth.

The Ace of Swords Reversed as Advice

In the wavering realm of Swords, it is our own perplexity that must be destroyed, for the sake of sanity and truth.

As an advice card in reverse, the Ace of Swords points out that the seeker’s thoughts are too perplexed and aggressive. They are not in a good state of mind, aimlessly pondering and thinking things over and over. Their perception is distorted or too narrow, and they need to wind down and think it all over.

When emotions seize control of the mind, errors in judgment are inevitable, and when our subjective thoughts are mistaken for the truth, we are treading on shaky ground.

The reversed Ace of Swords is an intrusive, threatening card; the source of this threat could be internal, namely confusion, anger, self-deception, and disarray, or external, like a person who is overly concerned or even obsessed with another for all the wrong reasons, overstepping boundaries, talking about them behind their back, and causing trouble.

This card always stresses the importance of communication, swiftness, and clarity; its reversal implies a lack of those qualities but also points at truths that have been concealed, enmity, and hasty conclusions reached through fallible reasoning.

A piece of sound advice would be to try and reach a state of equanimity, to maintain your self-composure; only then will erroneous concepts crumble, the truth will shine, and you will see the cause of your pain. 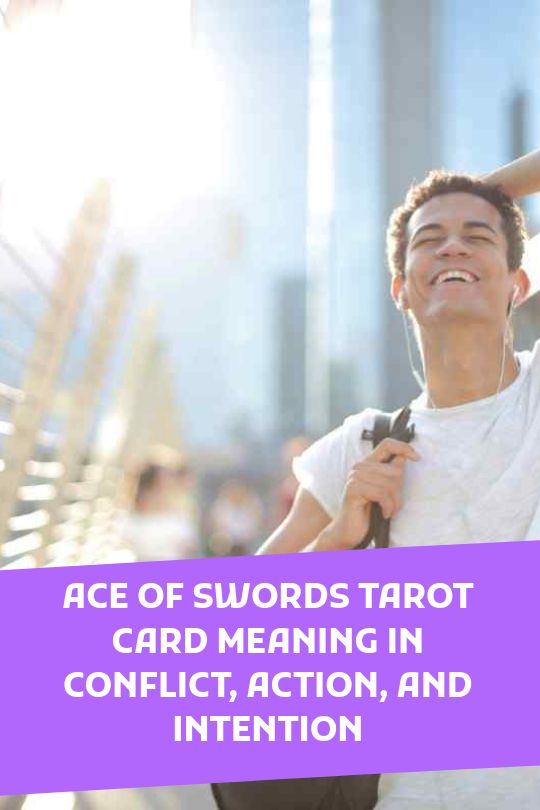