To make a Taurus woman commit to you, you must be a gentleman and show her how trustworthy and reliable you are. Do a lot of chivalrous things. A Taurus woman does not like to feel pressured, so be patient when she takes her time. Show her how practical you can be and do not forget to look your best around her.

There are more factors you need to consider when you want to make her commit to you naturally. If you want to level your relationship up with a Taurus woman, then I suggest you read further!

Each Taurus woman is one of a kind, so you’ll have to learn her deepest secrets before she’ll make the final decision. It’s reasonable to assume that a Taurus woman will be forthright in expressing her feelings. However, it’s more than likely that she’ll only commit to someone she considers to be the ideal partner.

Before she realizes your potential, you’ll probably have to show her that you’re interested in having a long-term relationship with her.

This isn’t to say she won’t have a fling now and then; it just means she won’t put serious effort into a meaningless relationship.

For a Taurus woman to make such a commitment, she needs certainty and trust, and these feelings may take a long time to develop. Your Taurus woman is an independent woman who lives in a stylish home, is refined, well-mannered, and willing to pay for quality. When it comes to your relationship, you can expect her to be sensitive and intuitive.

Taurus women, on the whole, are motivated by a sense of intimacy rather than tradition. If she insists on making a public commitment, it’s because it makes her feel safer in the relationship.

She’s still deciding whether or not this relationship is viable, and she’s exposing herself in an attempt to show you her true self.

Similarly, if you act in a way that betrays the trust that has been built up this far in your relationship, you can expect her to end it.

A Taurus woman will become extremely loyal once she has decided to commit to your relationship. This may be accompanied by jealousy, causing tension in certain relationships and she’ll want to spend more and more time with you in every interaction.

You may find that she works hard to create a stable home or lifestyle for you, with the goal of making your relationship a safe and secure environment for both of you.

5 Ways To Make A Taurus Woman Commit To You

She won’t commit to you until she’s fully prepared, and coming on too strong or rushing her will only scare her away. It’s crucial to be patient because she will never allow herself to be rushed, especially when it comes to something as important to her as love.

A Taurus woman will need to spend some time getting to know you and weighing the benefits and drawbacks of committing to a relationship.

Taurus women are very slow in their relationships and they don’t want to make a hasty decision and regret it later. If you want a Taurus woman to commit, you’ll need to be patient. If you put too much pressure on her, she’ll have no second thoughts about leaving you right then and there.

You must respect her personal space because it’ll take a long time for her to agree to a date, let alone commit. Taurus women can’t stand change, so you’ll have to convince her that you’re worth the risk of committing.

She enjoys having fun, but not if it involves too much risk or jeopardizes her safety. When it comes to making a Taurus woman commit, the one thing you never have to worry about is coming across as too dull and boring.

Taurus women dislike excessive excitement because it makes them nervous, and they have a difficult time dealing with unexpected surprises. Constant change is definitely not the spice of life for your average Taurus woman.

So, when you’re around a Taurus woman, avoid last-minute plans, don’t change your plans unless it’s absolutely necessary, and try not to be unpredictable. When it comes to keeping your word, don’t lie and if you say you’ll do something for her, you should follow through.

For a Taurus woman, material success is a powerful love magnet. Of course, this isn’t the only quality she seeks in a partner, but it certainly adds to their appeal. You’ll gain a lot of bonus points with a Taurus woman if you talk about money, discuss investments, or analyze the global economy.

She’ll be drawn to your ability to increase her assets, despite the fact that she’s usually quite good with money in her own right.

A Taurus woman doesn’t look for a partner who is incapable of standing on their own two feet. If you’re in between jobs or something, she’s not going to reject you, but if you have the stability she seeks, make sure she knows.

These things are necessary to draw and keep her attention on you long enough to even be considered, even if you’re not thinking of long-term commitment.

Although the Taurus woman is practical, she is also intensely romantic and has a soft spot for a good-looking man. To make her commit to you, make yourself as appealing as possible by paying special attention to your grooming and presentation, as well as wearing your most fashionable outfits and accessories.

Make sure you look and smell irresistible, and be a little touchy-feely when you’re around a Taurus woman to appeal to her highly developed senses. But don’t make the cardinal mistake of coming across as deceitful; this woman is looking for a long-term relationship, not just a one-night stand. If you assault her senses, this will cause her to want to distance herself from you, so take it easy.

It’s not difficult to make a Taurus woman commit to you if you follow these rules of seduction and don’t overcomplicate things. Your Taurus woman has a deep appreciation for beauty and nature, so flowers are an excellent choice.

Demonstrate your desire for a Taurus woman in a gentlemanly manner. That means you must create a moment that is pleasing to her eyes, ears, touch, taste, and smell.

She wants someone who recognizes her brilliance and is willing to tell her. So shower your Taurus woman with compliments and flattery, but make sure they’re sincere. Allowing her to know how special she is will encourage her to commit to you more quickly.

And as you progress in this relationship, you’ll notice that her actions become more welcoming and inviting.

5 ways to make a Taurus woman commit to you, final thoughts…

To make a Taurus woman commit to you: 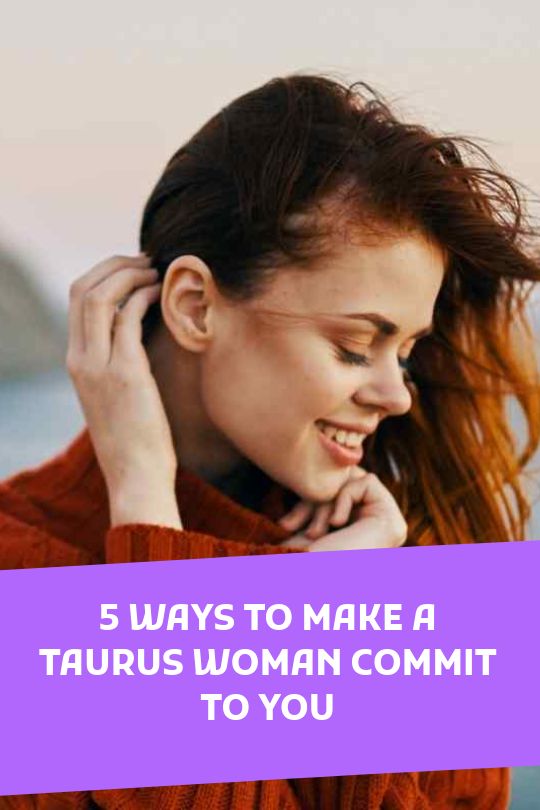